Earlier, Chahal caught up with Rohit on the much-talked-about 'Chahal TV', a series of interviews that he has promised to air throughout the ODI series Down Under.

India vs New Zealand 2019: Riding high on confidence after outplaying New Zealand in the series opener at McLean Park on Wednesday, vice-captain Rohit Sharma seems to be in the relaxed mood after the victory. Away from home, Rohit shared an adorable post on his official Instagram handle where he can be seen with his wife Ritika Sajdeh. He shared a picture in which he wrote, “Miss my Love”. The picture instantly garnered huge admiration by Rohit and Ritika’s fans on Insta as comments started to pour in. Also Read - IPL 2020: MS Dhoni-Led Chennai Beat Virat Kohli's Royal Challengers Bangalore to Stay Alive in Playoffs Qualification Race

But, there was one comment which drew everyone’s attention and it was of none other than Team India leg-spinner Yuzvendra Chahal. Known for his funny and out-of-the-box humour, Chahal knowingly somewhat spoiled Rohit and Ritika’s special moment with a hilarious reply. The wily spinner wrote in the comments section, “I miss myself”. Also Read - IPL 2020 Highlights, RCB vs CSK Match 44, Dubai: Sam Curran, Ruturaj Gaikwad Help Chennai Beat Bangalore by Eight Wickets to Keep Playoffs Hopes Alive 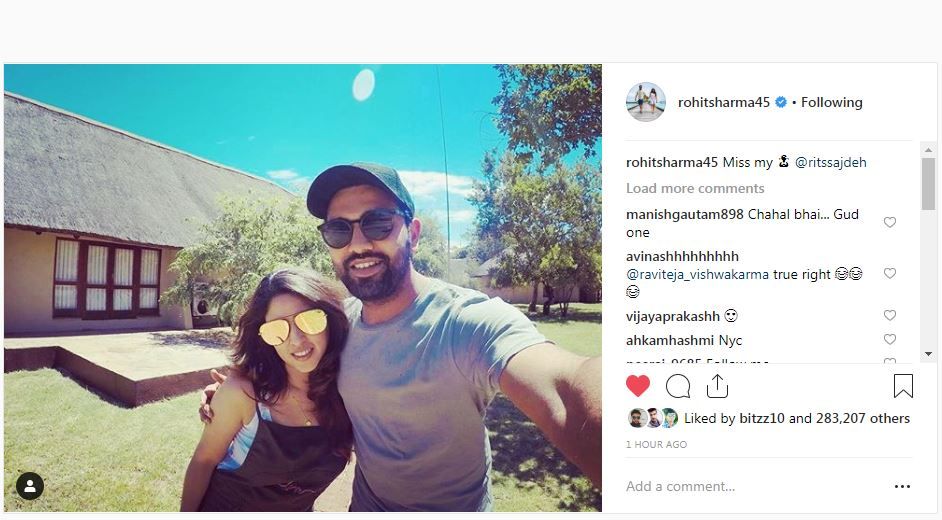 Earlier, Rohit and Ritika welcomed a new member in their family as Ritika gave birth to a newborn baby girl – Samaira on December 30. Ritika’s cousin sister Seema Khan, who is the wife of actor-producer Sohail Khan, confirmed the news on her Instagram account with the caption “Baby girl, masi’s again,” and tagged Ritika in the Insta story. Also Read - Joe Root Calls Virat Kohli as The Most Complete Player Across Formats

Rohit and Ritika had managed to keep the news of the pregnancy hidden from the rest of the world for quite some time but the Indian cricketer recently revealed that he was going to be a father.

Rohit opened up about his wife Ritika’s pregnancy in a chat with former Australia captain Michael Clarke in a promotional video.

“I cannot wait to be a father; it is going to be a game-changing moment in our lives. I am eagerly awaiting the moment of becoming a father. It will be a moment to change our life,” Rohit told Clarke.

The 31-year old opener will lead Team India in absence of regular captain Virat Kohli. Kohli was rested for the last two games of the five-match ODI series against New Zealand and the following T20 series owing to his “workload in the last few months”.