AB de Villiers And His Wife Danielle to Have Third Child Together; Anushka Sharma Reacts

AB de Villiers: The cricketer's wife posted a picture of her bump and seemed excited to welcome their third child.

Since retiring from international cricket in 2016 – De Villiers, recently was contemplating coming out of retirement before the pandemic brought everything to a standstill – he has been spending a lot of his time with his two kids and wife. Also Read - IPL 2020: KKR Captain Morgan Calls Win Over DC as Their Most Complete Performance of The Season so Far

Meanwhile, De Villiers was slated to feature for Royal Challengers Bangalore for the cash-rich Indian Premier League, which has now been postponed indefinitely due to the pandemic.

Hours after Danielle shared the news, Bollywood actress Anushka Sharma took to Instagram and responded to the former’s post. “Congratulations Danielle & AB. Such good news,” she commented on the post wishing the AB de Villiers and Danielle de Villiers. 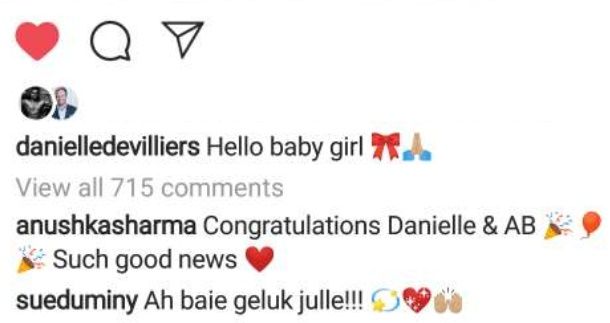 De Villiers – will now be seen playing the 3TC match organised by Cricket South Africa (CSA) on July 18. He would be leading AB’s Eagles team comprising of national players like Aiden Markram, Lungi Ngidi, Andile Phehlukwayo and Rassie van der Dussen among others in the side.