Action against Chennai Super Kings would be disastrous for IPL, warns India Cements

Mudgal Committee inquired into the allegations of match fixing and betting on the direction of the apex court and had submitted its final report Nov 1. The committee, in its report, said that Srinivasan's son-in-law Gurunath Meiyappan was involved in betting while exonerating him of spot fixing charges. 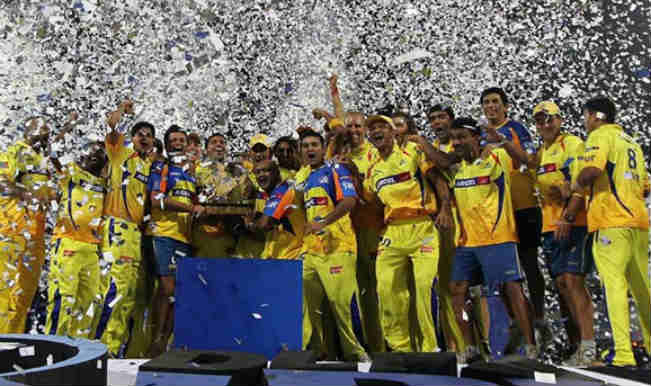 New Delhi, Nov 21: India Cements Limited – owner of Indian Premier League (IPL) franchise Chennai Super Kings – told the Supreme Court Friday that any action against it would have disastrous consequences for the cash-rich Twenty20 tournament. If any orders are passed against India Cements it could have “disastrous consequences not only for this respondent (India Cements) but also for the entire league, the cricketers involved, third parties such as sponsors, apart from millions of fans, Chennai Super Kings being arguably the most valuable and popular team in IPL,” India Cements said in its response to the Mudgal Committee report. Also Read - IPL 2020, KXIP vs SRH in Dubai: Predicted Playing XIs, Pitch Report, Toss Timing, Squads, Weather Forecast For Match 43

The committee described Meiyappan as a “team official” of CSK. Stating that Meiyappan had nothing to do with it, India Cements said the company has over 89,000 share-holders including a large percentage of public institutional shareholding. Meiyappan was earlier described as “cricket enthusiast”.

“Mr. Guruynath Meiyappan is neither shareholder, nor a director nor an employee and has not drawn any salary, honorarium or compensation of any kind from Chennai Super Kings or from India Cements,” the company said in its response. It further added: “However, the material on the basis of which the probe committee has arrived at this finding that he is a “team official”, has not been discussed in the report or disclosed to this respondent (India Cements).”

“The material on the basis of which such a finding has been arrived at ought to be provided to this respondent to enable this respondent to deal with the same if and when necessitated,” India Cements said. The company also said that “assuming without admitting” that Meiyappan was a “team official” of CSK, the demand by the Cricket Association of Bihar (CAB) – the petitioner – for disenfranchising the team under the provisions of the franchise agreement is “totally misplaced” since that provision deals only with the acts by the franchise itself or by a group company of the franchise or the “owner” of the franchise.”

Saying that franchise agreement itself states that “owner” of an IPL franchise is the one who ultimately controls the franchise, the company said: “Under no stretch of imagination can Mr. Gurunath Meiyappan be characterised as a person who is the “ultimate controller” of the respondent company.”

Having said that Meiyappan had no official relation with CSK, India Cements said that there was no “infraction of the IPL Code of Conduct, Rules and Regulations that have been pointed out by the probe committee” against it in its present report. Referring to the allegations in respect of one match that CSK played with another IPL franchise, India Cements said: “One of the allegations that was gone into was whether Chennai Super Kings had brought the game to disrepute in respect of one match played against another franchise.”

India Cements, the response said “bonafide believes that the said allegation of bringing disrepute has been disapproved since no findings has been given in the final conclusions.” Contending that Meiyappan held no position either with India Cements or CSK, India Cements said: “Consequently in this report, other than what has been mentioned about Mr. Gurunath Meiyappan, there is no adverse inferences that can be drawn against Chennai Super Kings, or its owners and its employees.”