Rohit Sharma bagged the Man of the Match and Series for his splendid batting display, which included a record-breaking 3rd T20I ton.

Afghanistan is no more considered among the minnows, thanks to their promising limited overs performances off-late. They whitewashed Bangladesh in India 3-0 and also qualified for the 50-over 2019 ICC Cricket World Cup. Afghanistan currently has a win percentage of 60 while chasing scores in excess of 150. India is second in the list with a win percentage of 52.2. Also Read - Indian Cricket Team Kit Sponsorship: Puma Buys Bid Document, Adidas Too Could Enter fray

It is surprising considering chase-master Virat Kohli plays for India and hence India rely heavily on chasing. India has chased 150+ on 23 occasions in T20Is and has emerged successfully on 11 occasions. Afghanistan, on the other hand, has chased 15 times and has emerged victorious on 9 occasions. Also Read - ICC ODI Rankings: Kohli, Rohit Maintain Hold Over Top-Two Batting Slots as England And Ireland Players Move Upwards

Number 3 on the list is Sri Lanka with 12 wins from 28 games with a win percentage of 42.9. Also Read - England vs Pakistan: If it Was Virat Kohli Everyone Would be Talking But Not so For Babar Azam: Nasser Hussain 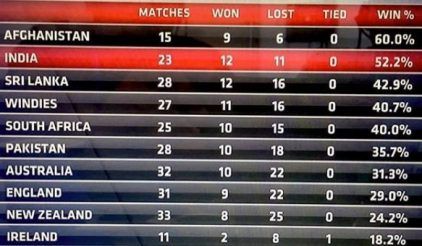 VIDEO WATCH: @DineshKarthik does some number crunching with @ImRo45 post the team’s series win in Bristol. Also, does Rohit like to be called the HITMAN? Find out more – by @RajalArora
Link—->https://t.co/myRsPwgImCpic.twitter.com/F6dTIIQLtf

“We were thinking of winning the series as a unit. Personal individual milestones will come along the way. But I was just thinking of how to finish the game. All the hundreds are important, cannot pick one hundred. But lots more to go. All three hundred were special, hence it is difficult to pick one hundred,” he said.

India chased a score in excess of 150 on both (Old Trafford and Bristol) the occasions that they beat England in the T20I series.