Surprisingly, the tweet was deleted soon after it surfaced on the social space and started getting viral.

Move over Imam ul Haq, young Shaheen Shah Afridi has been accused by a Twitter user of flirting with women online. The unknown user shared a screenshot of Shaheen’s private chat. This comes days after Imam courted controversy for a similar incident. The user feels this is the reason they are unable to perform to the best of the ability on the field as their minds are distracted.
“#ShaheenAfridi is the next big fish. Why they always fail to deliver on the field? They are always busy flirting with girls. They use their status and power to lure girls and then play with their bodies. More stuff to be uploaded soon,” wrote Feriha in her tweet as she cautioned the tall, young pacer on the block. Surprisingly, the tweet was deleted soon after it surfaced on the social space and started getting viral.Also Read - AB de Villiers Expresses Desire to Return to RCB in IPL 2023, Calls Bangalore His Second Home

Here is the screenshot shared by the user. Also Read - Recalling Tony Greig's 2012 MCC Spirit of Cricket Cowdrey Lecture: India Should Agree To Expand IPL To An Asian League | VIDEO 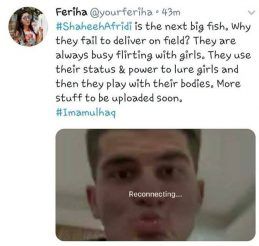 It is surprising to see young Pakistani cricketers getting involved in the wrong things. What is unfortunate is that both the cricketers are extremely talented and have shown that whenever they have got their opportunity. Shaheen has scalped 12 wickets in three Tests and 40 wickets from 19 ODI games. Also Read - Virat Kohli Gives Batting Tips to Afghan Stars After RCB Beat GT; Heartwarming Pic Goes VIRAL

Earlier, Pakitan cricketer Imam-ul-Haq has been accused of having affairs with multiple girls and manipulating them with his stardom. A twitter user, who has leaked screenshots of WhatsApp chats, has named the star cricketer for exploiting girls sexually and taking advantages of them in wrong manners.

He was also in the middle of criticism for his failure to perform on the cricket field as well. The batsman could not produce any memorable knock in the recently-concluded ICC World Cup 2019 and was subject to condemnations from all angles.