Matthysse's last fight was a seventh-round stoppage loss to Pacquiao in Kuala Lumpur, in which the previously explosive Argentine looked past his best.

“Today I decided to hang up the gloves, another stage in my life is beginning,” said the 35-year-old Matthysse, who ends his 43-fight career with a record of 38 wins, 36 inside the distance, for just five defeats and one no contest. Also Read - 'Stronger, faster' Pacquiao turns 40 with lavish birthday bash

Matthysse’s last fight was a seventh-round stoppage loss to Pacquiao in Kuala Lumpur, in which the previously explosive Argentine looked past his best. Also Read - Manny Pacquiao plans to retire in three years 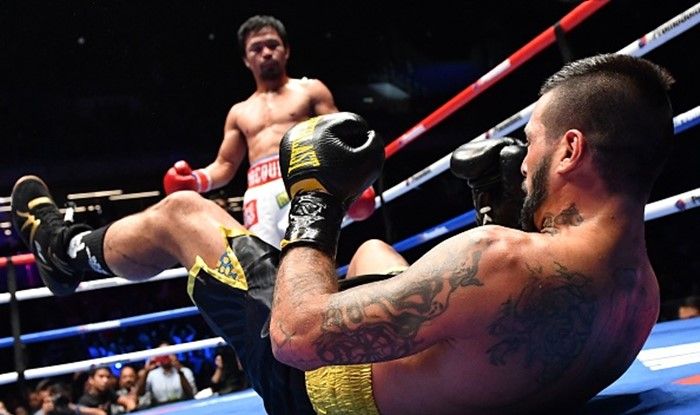 Argentina’s Lucas Matthysse reacts after he was knocked down by Philippines’ Manny Pacquiao during their world welterweight boxing championship bout at Axiata Arena in Kuala Lumpur on July 15, 2018.(Getty Images)

“Pacquiao is a great boxer, I lost to a legend,” he said.

“I’m proud to have stayed at the top for 10 years fighting the best in the world.” He won the WBA welterweight title in January with an eighth-round knockout of Thailand’s Tewa Kiram.

He previously held the interim WBC super-lightweight title but was narrowly beaten by American Danny Garcia in Las Vegas in 2013 when challenging for the full strap.