The 60-Test veteran told BBC Radio that Cook and team-mates Ian Bell and Gary Ballance "are not one-day players who are going to win you a World Cup". 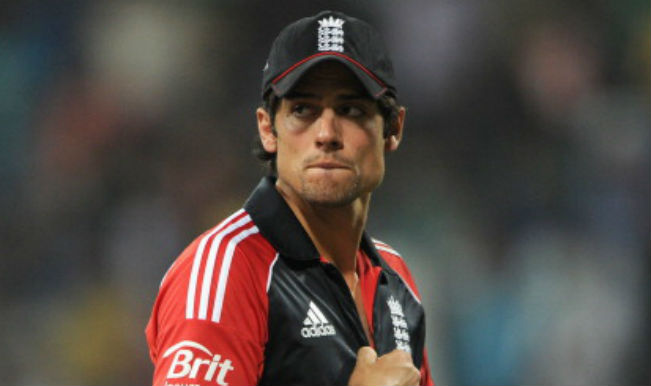 Also Read - IND vs ENG: Graeme Swann Asks England to Get Over Ashes Obsession And Focus on 'Unbeatable India'

London, Aug 28: Alastair Cook has expressed disappointment with former teammate Graeme Swann for suggesting that the England skipper should stand down from One-Day International (ODI) cricket. Swann, who retired from international cricket during the Ashes last summer, said Tuesday that England “do not have a cat in hell’s chance” of winning the 2015 ICC Cricket World Cup unless they add more firepower to the top of the order, according to Cricket Australia (CA) website. Also Read - Michael Vaughan Predicts India Will Beat England 3-0 in Upcoming Four-Test Series

The 60-Test veteran told BBC Radio that Cook and team-mates Ian Bell and Gary Ballance “are not one-day players who are going to win you a World Cup“. Speaking after England’s 133-run loss to India in Cardiff, Cook said Swann’s comments were not ideal. Also Read - Ravindra Jadeja Ruled Out of England Test Series, Call on White-Ball Matches to be Taken Later

“His remarks were not that helpful – especially from a so-called friend – but he’s entitled to his opinion,” Cook said. “But it’s not ideal for me, especially after getting through the summer I’ve had. I have not spoken to him about it. The phone is always open the other way. It’s a little bit disappointing.”

“He’s a good friend and has been a supporter and it’s not helpful at this time because I am going to go and captain in this World Cup. We’re going to build up to that and we’ve got a good chance although obviously if we play like that we aren’t going to win many games of cricket.”

Cook scored 19 from 33 balls against India at Sofia Gardens as England were routed for 161 in response to the tourists’ score of 304 for six. The 29-year-old averages 37.79 from 83 one-day internationals, with a career strike-rate of 77.98.

Swann and former skipper Michael Vaughan believe England’s brand of 50-over cricket is not dynamic enough to challenge the best teams in the world. “I used to sit in the changing room and I always felt we were so far behind other teams because we play such an old-fashioned brand,” Swann said.

“I love Cooky totally, but I do not think he should be bothering playing one-day cricket anymore. “Let young people (play) who want to smash it everywhere.” Vaughan added: “We’ve made the same mistake now as we did in my time, five to six years ago and in the 1990s.

“We’re picking one-day squads on Test form. “India have got power strikers all the way down. South Africa, Australia are all exactly the same. It’s a completely different era because of Twenty20.”