Anushka took to a social networking site to express her happiness over Virat’s century.

New Delhi: India skipper Virat Kohli was at his best again as he scored a tremendous century against South Africa to lead the Men in Blue to the victory in the first ODI of the six-match series. The Delhi batsman was also awarded man of the match trophy for his heroic efforts. Meanwhile, when the complete nation was cheering for Virat, there was someone who carried an extra personal cheer for him – his wife, Anushka Sharma.

The Bollywood actress, who will next be seen opposite Shah Rukh Khan in upcoming flick Zero, took to a social networking site to express her happiness over Virat’s century. Anushka, who tied the knot with Virat on December 11 last year in a private ceremony in Italy, took to Instagram to show her love and support for her hubby. The actress posted a series of photographs of the batsman and the highlight of Anushka’s Instagram story was the picture of Virat with the caption, ‘What A Guy’ with a heart emoji. 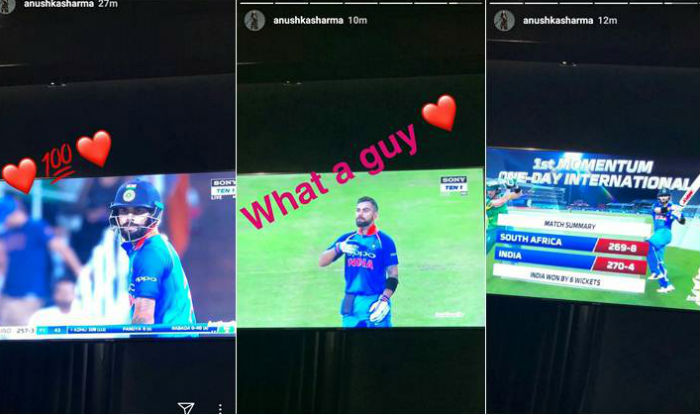 While chasing the target of 270 runs, Kohli hit 112 from 119 balls to register his 33rd ODI century which also saw India winning the game comfortably by six wickets and ending South Africa’s 17-match winning streak at home. The Men in Blue also registered their first ODI win in Durban and won their first ODI in South Africa in seven years. India will now play the next match of the series on February 4, Sunday and the visitors will aim to extend their lead and solidify their position in the ODI series.