India vs Bangladesh: India skipper Virat Kohli is proving to be a humble gentleman off-the-field once again.

India vs Bangladesh: India skipper Virat Kohli is proving to be a humble gentleman off-the-field once again. His humble, down-to-earth side was on full display when he walked up to the 87-year-old fan and thanked her for cheering for India all-day-long at Edgbaston. The Indian fan Charulata Patel became an internet sensation after she was seen enthusiastically rooting for the Men in Blue from a wheelchair. She won applause from all corner, even ICC did an interview with her and Kohli posted a heartfelt message for her as well. Also Read - Devdutt Padikkal Wants to take Domestic Form into IPL 2021

It is nice to see that Kohli’s message is winning hearts like never before as Anushka Sharma and Ranveer Singh have lauded the gesture from the Indian skipper. Here is a screenshot of Anusha, Ranveer’s reaction. You can also see that Kohli’s childhood friend Karan Wahi has also reacted along with his hairstylist Aalim Hakim. Also Read - IPL 2021 | To Have Captain Virat Kohli at Other End Makes Job Little Easier: RCB's Glenn Maxwell 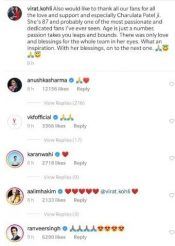 “Also would like to thank all our fans for all the love & support & especially Charulata Patel ji. She’s 87 and probably one of the most passionate & dedicated fans I’ve ever seen. Age is just a number, passion takes you leaps & bounds. With her blessings, on to the next one,” read Kohli’s post. Also Read - Rohit bats for Conservation of Rhinos

“I mean Bangladesh has played some really good cricket in the tournament. They deserve a lot of credit for the fight they put up, even till the last wicket I think they were in the game. We had to work hard for the win but very happy that we saw ‘Q’ (Qualified) in front of the team in the table now. Another game as an opportunity for us to do the same things we have done so far in the tournament, and I think that will keep us in the frame of mind heading towards the semi-final,” said Kohli at the post-match presentation.