Danny Welbeck scored the only goal of he game to give Arsenal their second straight win. 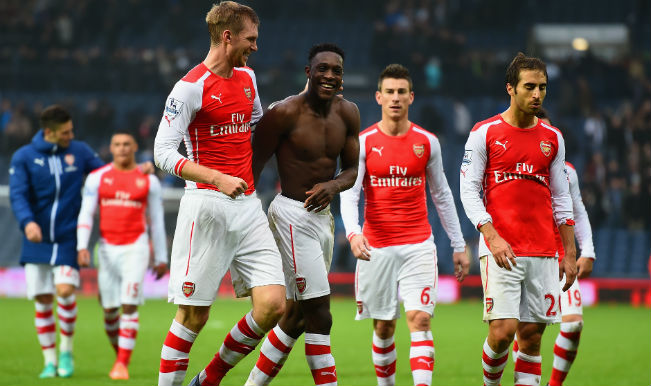 Danny Welbeck continued his rediscovery at Arsenal as a striker as he headed the only goal of the game to exorcise the ghosts of their tame capitulation against Manchester United last weekend to win the second game of the week. What was more pleasing for Arsene Wenger and the Gunners is that it was the second clean sheet too despite further injury troubles await them in the form of the fleet footed Alex Oxdale-Chamberlain and left-back Kieran Gibbs. Also Read - Transfer News: After Lionel Messi's U-Turn; Liverpool, Man United, Arsenal Look to Get Barcelona Star Antonie Griezmann: Reports

The initial passage of play was patient by Arsenal and they bided their time, sticking to their guns of keeping their shape. With Jack Wilshire’s imposing presence missed by Arsenal, Santi Cazorla’s lovely footwork and vision opened the West Bromwich Albion defence and the cross was finished clinically by Welbeck. Also Read - Aston Villa vs Arsenal: Hosts Out of Relegation Zone After Beating Gunners 1-0

There were a few near misses by Arsenal in the first half while the hosts’ chances were few and far between; the best of which fell to Craig Gardner in the dying minutes of the game. Gardner’s shot went wide and Arsenal’s followed up their lionhearted display during the midweek against Borussia Dortmund with yet another win.