English football club Arsenal is lining up an ambitious summer bid for Real Madrid star Karim Benzema, but could see its hopes of luring the France international frustrated by his current club president Florentino Perez. 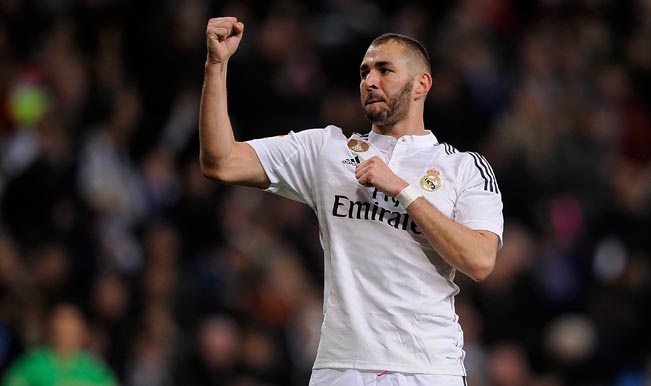 Madrid, May 26: English football club Arsenal is lining up an ambitious summer bid for Real Madrid star Karim Benzema, but could see its hopes of luring the France international frustrated by his current club president Florentino Perez. Arsenal believe Benzema would be interested in a move to London if the club is able to agree a deal, hoped to be around 50 million euros, with Real, goal.com reported on Tuesday. Also Read - SHF vs TOT Dream11 Team Tips, Fantasy Football Prediction Premier League 2020-21: Captain, Vice-captain And Predicted XIs For Today's Sheffield United vs Tottenham Hotspur Football Match at Bramall Lane 7:30 PM IST January 17 Sunday

The sticking point, however, is likely to be Perez with the Real president known to be a huge fan of the former Lyon man. Benzema is also extremely popular with his teammates who appreciate his work-rate and willingness to grant the limelight to the likes of Cristiano Ronaldo and Gareth Bale. Monday’s coaching change at the Spanish giants will give Arsenal encouragement though. Former Real coach Carlo Ancelotti viewed Benzema as a key cog in his first-choice starting XI. Real Madrid sack manager Carlo Ancelotti. Also Read - LU vs BHA Dream11 Team Tips And Prediction Premier League 2020-21: Captain, Vice-captain, Fantasy Playing Tips And Predicted XIs For Today's Leeds United vs Brighton & Hove Albion Match at Elland Road 8:30 PM IST January 16 Saturday

But it remains to be seen whether his successor — likely to be Rafael Benitez — shares the same faith in a player who scored 22 goals in 46 appearances in all competitions in 2014-15. Arsenal announced that they had cash reserves of 196 million euros in their last financial accounts and can easily afford to sign Benzema as their marquee summer arrival having brought Alexis Sanchez and Mesut Ozil in the last two years.

Manager Arsene Wenger wants to sign a top class striker as he prepares Arsenal for a title challenge next season following their third-placed finish this year. He tried to sign Luis Suarez from Liverpool in 2013 and believes Benzema, 27, is capable of firing Arsenal to their first Premier League triumph since 2004. Wenger is a huge admirer of the France international and tried to sign him before he joined Real from Lyon in 2009.

Arsenal are understood to be ready to listen to offers for Olivier Giroud to make room for Benzema, with French champions Paris Saint-Germain closely monitoring the 28-year-old’s situation. Wenger is targeting three signings to mount a title challenge next season and also wants a goalkeeper and defensive midfielder.