Catch Arsenal vs Manchester United Live Score Updates, Barclays Premier League 2014-15. While this encounter is one of the most watched battles in the Premier Leaguethis could very well be dubbed as a battle of injuries. 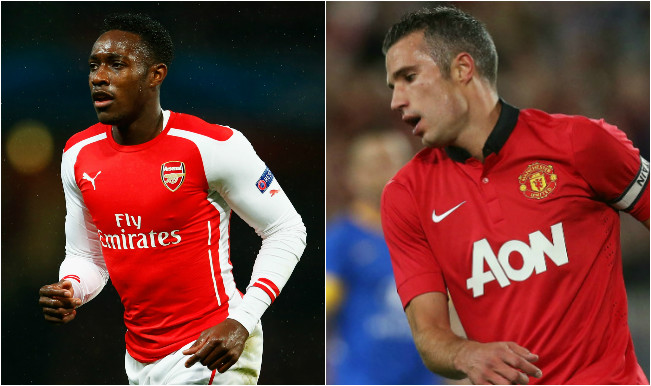 The lazy argument accused against Arsenal, which has been the case for a while is the fact that they have a soft centre. They played really well today but their first lethal shot on target came in the 94th minute of the game. Both goals conceded had a bit of naivete surrounding it but Manchester United continue their fantastic run against Arsenal and leapfrog to fourth. Hope you enjoyed our coverage. I will be back soon. Also Read - UEFA Champions League Draw: It's Messi vs Ronaldo Once Again as Barcelona Gets Drawn With Juventus in Group G

90+4′ Goal!! Giroud What a strike! The ball loops up in the air and falls to the Frenchman and the United defence hold back in contemplation. Giroud unleashes a magnificent shot off his favoured left foot and this leaves De Gea no chance. Game on.

90+2′ What a miss! Arsenal take a corner and with the entire Arsenal team forward the pass from Rooney finds Di Maria in space and the Argentinian runs forward at speed with nobody to mark him and his chip is wide of the target.

90′ Eight minutes of stoppage time and it will be Arsenal’s position in the Premier League table too after the end of the game unless they can pull off a rabbit out of their hats. Supporters are heading out to the exit door.

85 Goal!! Rooney! Brilliant counter by Manchester United and sadly, after a terrific game, it’s the same old story for Arsenal again against United. Fellaini steals the ball in midfield and its stright to Di Maria, who sees a yawning gap and its a 2 vs 1 situation, Rooney is ahead of him and goalie Martinez comes forward but the ‘white Pele’ does wonderfully well to chip the ball over the keeper.

83′ Arsenal have possession and are posing qquestionsoutside the area and United’s defence is holding firm here.

81‘ Arsenal not having the rub of the green here. Smalling jumps on Giroud and the Frenchman seeks a foul but referee Mike Dean waves play on.

78′ Arsenal getting forward in droves and but are not able to get that slice of luck or that decisive pass. Lot of 1-2’s with a concerted amount of pressure from the the Arsenal frontline. United’s defence holding firm.

76′ Substitution – Arsenal make their own substitution and Olivier Giroud comes on after a lengthy absence and Aaron Ramsey comes off.

74‘ Substitution – Boo Boo and and more more Boos as Robin van Persie comes off and is replaced by the teen aged James Wilson.

71′ Ramsey delivers a great ball, piercing the United midfield and Welbeck meets it upfront but Smalling makes a timely tackle to get the ball clear and United are safe.

67′ Another good move and there is no getting past De Gea yet again! a looped ball into the area is met by Welbeck, who heads it down to Cazorla, who is ghosting in and the Spaniard unleashes a shot with his right foot, but it’s straight to the keeper.

62′ Two attempts from Arsenal, who string a couple of lovely passes and nothing comes out of Gibbs’s pass. Chambers then gets the ball on the right wing and delivers a good ball into the box and it’s a sweet header from Sanchez, whose header is straight to the keeper, who makes another decent save.

58′  Substitution- Szczesny also can’t carry on and is stretchered off in the collision that led to the goal. Emiliano Martínez makes his Premier League debut.

55′ Goal!! Kieran Gibbs (Own Goal) Ashley Young on the left wing runs with the ball and Szczesny comes out and parries the ball straight to Valencia, who takes shot and the shot takes a deflection of Gibbs and it’s into the net. Szczesny is also down and he could do nothing about it. Felliani nudged and was also marginally offside during the cross. Twist of fate.

54′ Substitution – Wilshire can’t continue and he comes off to a rapturous applause from the home crowd and its Santi Cazorla who replaces him.

52′ Jack Wilshire is down and its big worry for Arsenal. The midfielder runs with the ball through the centre and reaches the edge of the United area and just as he is about to take the shot, Fellaini and McNair converge and Wilshire’s leg is tangled and is on the ground, writhing in pain. He is on his feet now and is on the touchline.

49′ Another gorgeous ball from Sanchez and Welbeck runs into space, McNair is after him but the striker continues his run and tries to shoot from an acute angle but De Gea has got it covered and the shot is parried away. Another save of authority by De Gea.

47′ Second half under way and it’s Chamberlain who is on the move for Arsenal. He makes a lovely turn and bombs to the byline on the right flank and delivers a good ball in the ‘zone’ and its turned behind by Fellaini for a corner. Then, Chamberlain takes a shot from outside the area and it’s another corner and Mertasacker heads it wide.

45+ arsenal on the ball again and they bomb forward in numbers. The ball then falls to Chambers on the right-wing, whose cross is well over. The young English Defender perhaps shouldn’t have delayed his cross.

42′ Chamberlain makes a surging, lung-bursting run down the left flank and has been terrific during the game so far. Arsenal work the ball inside the penalty box and Welbeck is in the six yard box and he has men surrounding it. Welbeck tries a cheeky backflick to the far post but his effort is off target.

40′ United finally find their rhythm and win a couple of corners. First is met by Carrick in the near post and is headed over the bar. It’s not done yet. Another corner and this time it falls to Smalling, who lashes at it but is well wide of the target.

38‘ Brilliant defensive work by Chambers,who makes a brilliant last ditch effort to deny Rooney. United, for the first time in the game broke past the Arsenal midfield in the middle of the park and the save was just in the nick of time.

35′ Di Maria on the right-wing is giving Arsenal problems. Just a minute earlier, Sanchez broke through on the left wing for Arsenal and the shot was on the ground and straight to De Gea. Routine save and then at the other end, Fellaini chests the ball down expertly and Di Maria curls the ball to the top corner and misses his target by a couple of inches.

32′ Manshester United work the ball from side to side and it’s the right wing where Valencia is patrolling that the cross comes from. Angel Di Maria takes the shot and the ball is saved easily by Szczesny.

29′ Fellaini and Wilshire come together and the Arsenal man looks to have made an infringement, which Mike Dean blows the whistle for. Wilshire is furious. Both players then get into a heated confrontation and needs players from both teams to separate the two.

27‘ Arsenal are constantly testing and probing and the United defence is on all fours yet again. Welbeck’s low shot wins a corner but the resulting corner is too high for Welbeck to connect.

Didn’t mention this: Substitution – Manchester United take off Luke Shaw, who limps off due to injury and Ashley Young replaces him.

21‘ Another chance for Arsenal which is straight out of a gaolkick. Di Maria was tripped and Rooney’s free-kick from 30 yards out is straight to row x. Szczesny passes it straight to Sanchez on the right wing, who creates a wonderful through ball and De Gea is off his line, trying to block Chamberlain. The spanish stopper does a good job and another good chance goes begging.

18′ Manchester United trying to settle down here and it’s Van Persie on the ball and he takes it to the byline and Mikel Arteta does a good job in shielding the ball and there are loud cheers, which can make you wonder if Arsenal had scored.

14′ Arsenal are all over united here and Wilshire and Welbeck have shots from way out. Good pressing upfront induces United to make a mistake, De Gea with a poor kick and Wilshire starts a great move, interchanging a couple of 1-2s before running into the area and shooting it straight at the Spanish goalie. It was a good save but Wilshire missed a glorious chance there.

11′ After Silva and Fabregas, Fellaini is given the job of keeping Sanchez is check and the Chilean does wonderfully well to skip past the Belgian and delivers a sumptuous ball but Ramsey can’t meet it in the centre of the park.

8′ Welbeck is getting into the game and he almost scores against his former team here. A good right wing cross is met by the Striker but he can’t control it because of the pace of the ball. Could have done better with the header.

5′ Ramsey gets in down the right wing and almost gets past De Gea as well. It’s a corner and Alexis takes the corner and the towering Mertasacker is in space and the German had to to better than that. It was a half chance and it’s headed wide.

2′ Boos ring through the Emirates as Van Persie is on the ball. Excellent work by Shaw to burst forward from the left flank and then switching the ball to the left flank. Van Persie gets in space and nothing comes off it.

Arsenal and Manchester United, one of the oldest battles and in the Premier League 2014-15, this could very well be dubbed as a battle of injuries. Both teams are teams with enormous history behind them and are holding back to their past glory. Gone are the days when the the legendary battles between Roy Keane and Patrick Vieria would make the fans sit on the edge of their seats. The recent battles have underlined the defensive frailties of the two sides. It has also culminated into a a one-sided contest, especially in the later half of the Alex Ferguson years. Catch the Live Streaming of the match match here

The harrowing 8-2 drubbing by United will not be forgotten that quickly and but the kick in the teeth for the Gunners came when the then captain and talisman, Robin van Persie jumped ship to United. This battle, under strange circumstances, will have Danny Welbeck, who jumped to Arsenal this summer play against his boyhood club.