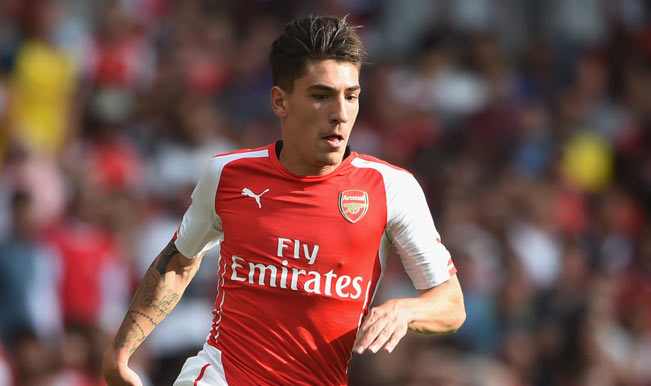 Hector Bellerin is poised to start in his second competitive game for Arsenal.

Arsenal take on Southampton in the third round of the Capital One Cup 2014-15 at the Emirates Stadium on Tuesday night. The kick-off is scheduled for 12:15am IST (7:45 pm BST, 6:45 pm GMT) but the game will not be telecast live in India. Live streaming link will be available on Ten Sports’ official website while live score and additional live streaming details will be available on LiveSoccerTV. Also Read - Pierre-Emerick Aubameyang: Arsenal Captain Signs New Three-Year Contract

The Gunners are among the six teams to gain direct entry into the third round of the English Football League Cup due to their participation in European competitions. But that counts for less as they face fellow Barclays Premier League team Southampton. Jack Cork and Graziano Pelle’s goals gave the Saints a 2-0 win against Championship club Millwall earlier this month. Also Read - Transfer News: After Lionel Messi's U-Turn; Liverpool, Man United, Arsenal Look to Get Barcelona Star Antonie Griezmann: Reports

Arsenal manager Arsene Wenger has already confirmed that Abou Diaby will start the match and the 64-year-old is expected to make some more changes as the north London club yearn to qualify into the fourth round. The two teams have faced each other in the League Cup four times in their history and the Gunners have never lost a tie with the last victory dating back to 1979. Also Read - Southampton Weather Forecast, England vs Australia 2020, 1st T20I: Rain Predicted But May Not Impact The Contest

Click here to read the preview and team news of this match.