Ashes 2019: With England reeling at 286/9 chasing 359, it seemed curtains for the hosts and it looked like Australia will retain the Ashes.

Ashes 2019: To err is human, even ICC made a goof-up but realised it soon and took the required measures in order to not let it blow out of proportion. With England reeling at 286/9 chasing 359, it seemed curtains for the hosts and it looked like Australia will retain the Ashes. In all the excitement and all, ICC put out a post which read, “Australia retain Ashes”. Soon, they realised the game was still on and Ben Stokes was set. Immediately, ICC deleted the tweet, but screenshots were taken by then.

After exactly an hour, Leach and Stokes had done the impossible by guiding England to a one-wicket win at Headingley. Stokes remained unbeaten on 135* as England levelled the Ashes 1-1. 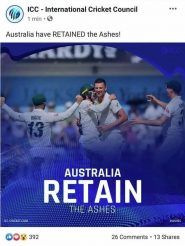 Some fans who took a screenshot took a dig at the apex cricketing body:

The game is still going on and icc have already decided the the ashes have been retained by Australia 🤣🤣🤣🤣🤣🤣 @ICC 🤣🤣🤣 @cricketcomau pic.twitter.com/qs20LT39Bo

“It was unbelievable and something I will never forget. I’ve got to take it all in. I’m not sure it will ever happen again. It’s in the top two feelings I have ever had on a cricket field,” Stokes told Sky TV.

“It is right up there (with the World Cup win). We had to win this game and we managed to do it,” said the all-rounder who smashed an unbeaten 84 in the World Cup final one and a half months ago against New Zealand at Lord’s. England won that match for hitting more boundaries after the match, as well as the Super Over, ended in a tie.

“We have to move on to the next game (at Old Trafford from September 4) having managed to keep our hopes alive of doing the double. We have the momentum. (I love) being part of those challenges you get faced with — we are playing at the highest level and you don’t expect anything else,” Stokes said.