We've announced our 12 for the 1st T20I against Australia at The Gabba #TeamIndia pic.twitter.com/c6boLtieGf

Australia vs India 2018: With a day to go for the start of the most awaited India tour of Australia, Afghanistan spinner Mujeeb ur Rahman has taken a pick between India captain Virat Kohli and banned Australian captain Steve Smith for his favourite batsman. It is a reason for Viratians to celebrate as King Kohli happens to be the Afghani’s favourite player, he revealed it in an Instagram convo with a fan who posed the question. Also Read - Sidhu, Mongia Find Place Alongside Captain Ganguly and Tendulkar in Warne's All-Time India XI 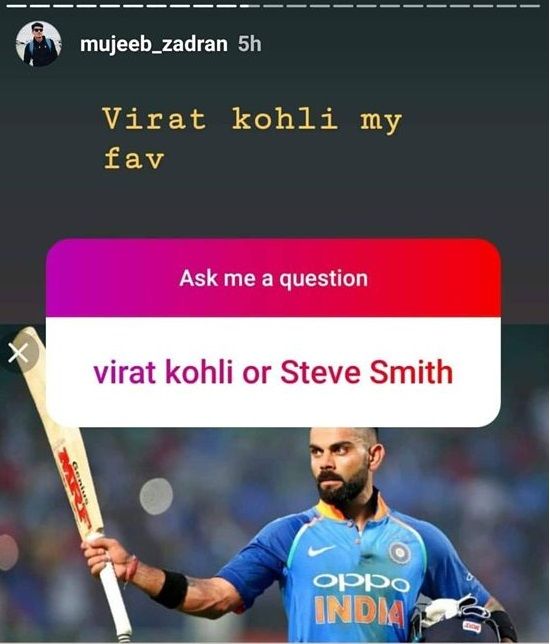 He revealed it in a #AskMeaQuestion session. Also Read - Anushka Sharma Reflects on Her Realisations During COVID-19 Lockdown, Says ‘Our BASIC is Not Basic For Everyone’

Meanwhile, both the cricketers have had a contrasting 2018. If Kohli has become the No 1 batsman in the world in T20Is and ODI, then, on the other hand, Smith has been banned from playing cricket after he was caught in a ball-tampering scandal earlier in the year.

Kohli has also become the fastest to 10,000 ODI runs as well has become the only India to slam three consecutive centuries in ODI cricket. Kohli has been in the form of his life, whereas the New South Wales-born cricketer has been away from the game.

We’ve announced our 12 for the 1st T20I against Australia at The Gabba #TeamIndia pic.twitter.com/c6boLtieGf

Steve Smith, David Warner and Cameron Bancroft will all have to serve their full bans for ball-tampering, Cricket Australia ruled on Tuesday after reviewing a submission by the players’ union to cut the penalties. CA interim chairman Earl Eddings said the board had “determined that it is not appropriate to make any changes to the sanctions handed down to the three players”. Smith and Warner, then Australia’s captain and vice-captain, were banned from state and international cricket for 12 months over the incident in South Africa in March, while Bancroft was suspended for nine months.