Australia vs India 3rd Test Melbourne: After ICC called the ‘Perth’ pitch as average, former cricketers Mitchell Johnson and Aakash Chopra got engaged in a Twitter war. While the former Australian speedster felt the pitch was good and such pitches are good for Test cricket, Aakash did not agree with him. It was the Aussie speedster who did not comprehend with the rating for the pitch. Former Australian speedster, Mitchell Johnson slammed ICC for the rating in a tweet, “Nothing wrong with it. It was exciting to watch a contest between bat and ball for a change and not these dull flat tracks being served up constantly. I’d actually be interested in knowing what a good pitch is? Hope for another exciting test at the MCG.” Also Read - SRH vs DC 11Wickets Fantasy Cricket Tips Dream11 IPL 2020: Pitch Report, Fantasy Playing Tips, Probable XIs For Today's Sunrisers Hyderabad vs Delhi Capitals T20 Match 47 at Dubai International Cricket Stadium 7.30 PM IST October 27 Tuesday 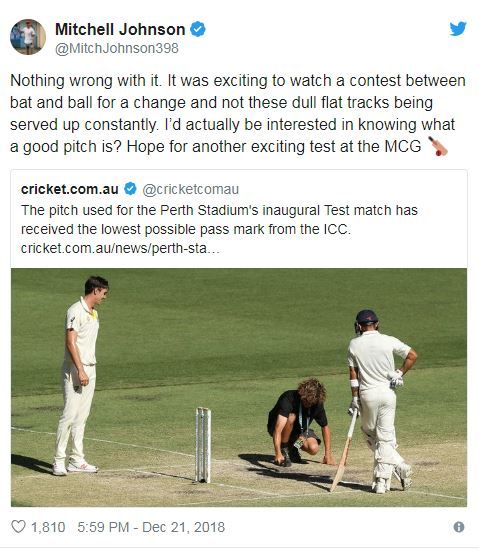 This led to a series of tweets which saw Johnson getting worked up while Aakash tried to present his point of view. Here are the tweets:

You spoke of natural deterioration that leads to variable bounce. That ball was a reflection of variable bounce on the first day. Not dangerous then. But yes…that Shami spell on day four was close to dangerous….felt that player safety was in question. Therefore the rating. https://t.co/AlE4Me9Iko

I never said that I want to see cricket on feather beds..ICC rated the pitch ‘Average’-I agree with their neutral observation based on the feedback of match officials. You don’t. We r entitled to have our own opinions. FOE. Too bad if the pitches you played on got a ‘good’ rating

It seems Mitchell Johnson has deleted all his tweets as it cannot be accessed.