The 23-year-old admitted she felt anxious appearing in the first centre court match of this year`s tournament and struggled to put away Knapp, ranked number 50 in the world. 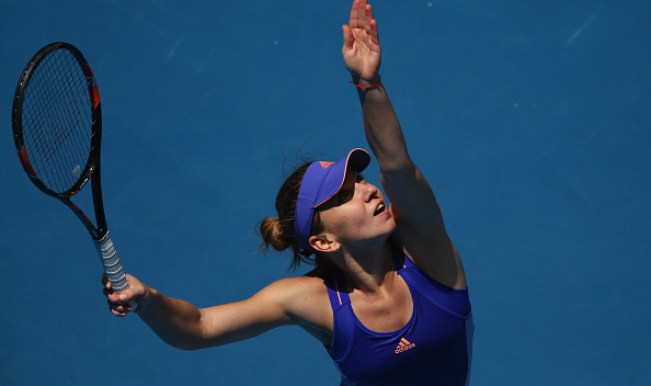 Melbourne, Jan 19: Third seed Simona Halep overcame a nervy start to advance to the second round of the Australian Open on Monday, defeating Italy`s Karin Knapp 6-3, 6-2. The Romanian, a quarter-finalist at Melbourne Park last year, is looking to build on a breakthrough 2014 when she reached the French Open final and the semi-finals at Wimbledon. Also Read - ATP Rankings 2021: Rafael Nadal Drops Out of Top-5, Daniil Medvedev Closes in on World No.1 Novak Djokovic; Felix Auger-Aliassime Jumps To Career-High

The 23-year-old admitted she felt anxious appearing in the first centre court match of this year`s tournament and struggled to put away Knapp, ranked number 50 in the world. “It was a tough match for me and I was very nervous before the match but I`m very happy now and I`m sure that next time I`ll play better,” she said. Also Read - World No.3 Simona Halep Withdraws From Wimbledon Due to Calf Inury

Despite the emphatic scoreline, Halep`s stuttering display fell well short of the form she showed earlier this month to win her ninth WTA title at the Shenzhen Open. But the world number three was confident she would soon be back to her best. “I started well in Shenzhen and won the tournament there but the first Slam is different and there`s much pressure here and I feel that,” she said.

“But I feel good and I`m sure I`ll have the chance to win many more matches.” She looked rusty from the outset, conceding a break in her first service game. Knapp eventually buckled in a first set that went for 45 minutes but the Italian fought all the way before going down 6-3.

The second set began in a similar fashion with Halep again down a break early but immediately clawed her way back in the face of some dogged resistance from Knapp. The Romanian set up two match points, squandering the first when she hit a backhand long but claimed victory on the second when Knapp sent her return into the net. Also Read: Australian Open 2015 Day 1 Schedule: Roger Federer, Rafael Nadal, Maria Sharapova play on January 19