Barcelona defender Gerard Pique on Wednesday said he gets better with age and wants to stay at the Spanish club for the rest of his career. 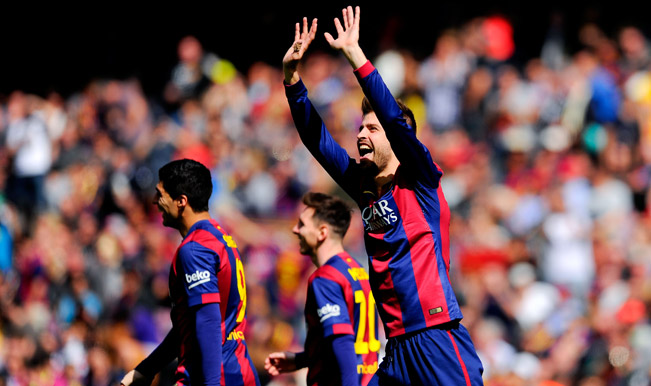 Barcelona: Barcelona defender Gerard Pique on Wednesday said he gets better with age and wants to stay at the Spanish club for the rest of his career. The Spain centre-back has enjoyed a glittering career at Camp Nou, lifting his fifth Liga title this month. The 28-year-old has another four years on his contract with the Spanish champions and has no intention of moving on to pastures new before he ends his playing days unlike team-mate Xavi, who is departing at the end of the season to play in Qatar for Al Sadd. Also Read - Watch: Mass Snowball Fight Breaks Out in Madrid As Youth Make Most of Blizzard

“I’ll retire at Barca. I don’t know when – the older I am, the better. I’m sure about that; I can’t see myself wearing any other shirt. If I see that next year I’m not up to scratch, I’ll hang my boots up at 29 years of age. I don’t associate this sport with anything except Barcelona,” Pique was quoted as saying by Spanish daily Marca. Also Read - Lionel Messi Edges Past Cristiano Ronaldo's Free-Kick Record as Barcelona Beat Granada 4-0

Barca face Athletic Bilbao in the Copa del Rey final at Camp Nou on Saturday before taking on Juventus in the Champions League final in Berlin a week later and Pique is determined to add another two winners’ medals to his vast haul before his summer holidays.

“There comes a point when you realise that you’re storming forward, that you can beat anyone and this is what has ended up winning us the league and putting us in two finals. Now we mustn’t stop, we have to win the two matches that are left and make it a perfect season,” Pique concluded.