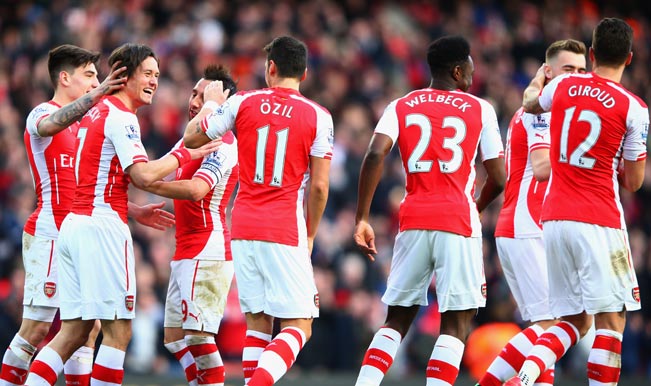 Arsenal extended their winning run in the Barclays Premier League 2014-15 to three matches with a 2-0 win over Everton on Sunday. The Gunners were overtaken by Manchester United on Saturday but goals from Olivier Giround and Tomas Rosicky put them back in third place with 50 points. This was their 100th win over the Merseyside club in all competitions. The defeat puts Roberto Martinez’s men in a spot of bother as they are dangling four points above the relegation zone. Also Read - Pierre-Emerick Aubameyang: Arsenal Captain Signs New Three-Year Contract

The North London club prepared for this fixture in the worst manner possible, suffering a 1-3 humbling in the round of 16 UEFA Champions League clash against Monaco last Wednesday. Arsene Wenger made two changes to the side with Gabriel Paulista and Alex Oxlade-Chamberlain replacing Per Mertesacker and Danny Welbeck. The home side started slowly but soon garnered the necessary momentum with Giroud and Alexis Sanchez failing to make the most of their chances. Also Read - Transfer News: After Lionel Messi's U-Turn; Liverpool, Man United, Arsenal Look to Get Barcelona Star Antonie Griezmann: Reports

Everton could have taken the lead but some clever goalkeeping from the Gunners’ custodian David Ospina prevented Romelu Lukaku from opening the scoring. Nonetheless, Giroud got his ninth league goal of the season when he turned home Mesut Ozil’s corner with great precision in the 40th minute. Arsenal had to wait till the 89th minute to seal the points when Rosicky’s effort took a deflection off Phil Jagielka’s foot to send the ball over a hapless Tim Howard.

Arsenal are just four points behind reigning champions Manchester City but have Liverpool breathing down their necks in fifth place; just three points separating the two.