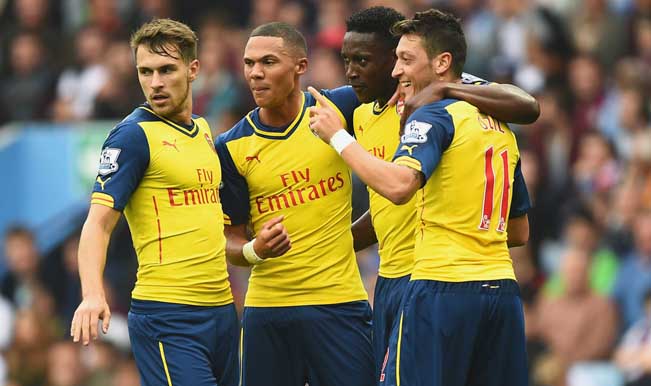 Arsenal’s new winger Danny Welbeck opened his account for the club as Arsene Wenger’s side thrashed Aston Villa 3-0 in their Premier League encounter. Arsenal opened the scoring when Welbeck put Mesut Ozil through on goal in the 32nd minute and the German slotted home calmly. Ozil repaid the favour by crossing for Welbeck to sidefoot in from close-range as the England striker scored for the first time in 16 club games. Also Read - Pierre-Emerick Aubameyang: Arsenal Captain Signs New Three-Year Contract

Villa defender Aly Cissokho turned a Kieran Gibbs shot into his own net and his failed to recover after from the three back to back goals in within four minutes, The BBC reported. Arsenal were fortunate to escape with only a 2-0 defeat from Borussia Dortmund in the Champions League in midweek, while they had drawn three Premier League games before the trip to the Midlands. Also Read - Transfer News: After Lionel Messi's U-Turn; Liverpool, Man United, Arsenal Look to Get Barcelona Star Antonie Griezmann: Reports

They ended that stutter in form with devastating goal blitz in which two of their more criticised stars in Ozil and Welbeck did the damage as the Gunners made it 16 games at Villa Park without defeat. Also Read - Arsenal Fans Fly 'Back Arteta, Kroenke Out' Banner Over Villa Park in Support of Manager

The defeat was the first in the league suffered by Villa this season as a combination of Arsenal’s first-half performance and a virus that had swept through their camp proved too much for them to handle. Villa boss Paul Lambert had lost defender Nathan Baker and midfielder Ashley Westwood to the illness but said that, despite other players not feeling the best, his side would go for it.

Lambert on virus sweeping through side said that he does not know what kind of virus it is, but added that it is certainly doing its rounds at the training ground so they will clear that place for a couple of days. He said that to play Arsenal one needs everyone fit and Villa never had that, but all credit to them for the second half, as the lads were running on empty.

Meanwhile, Wenger said that Arsenal had a good work-rate and concentration from the start, adding that they had a very good first half when his men were in control and dominated the game. Wenger said that Welbeck and Ozil combined very well, especially in the first half, adding that their plan was to play Ozil behind Villa’s midfield and it worked.