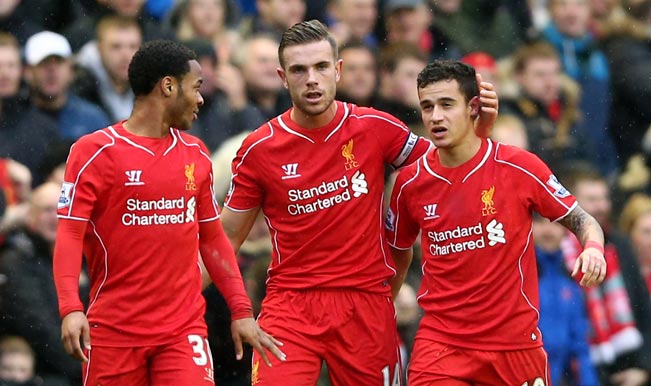 Manchester City’s search for a first win at Anfield since 2003 continued as the reigning Barclays Premier League champions suffered a 2-1 defeat against Liverpool on Sunday. In a tie that is bound to have implications in the title race as well as the race for top-four places, the Reds overtook Southampton to move to fifth place in the table with 48 points, just three behind third-placed Arsenal. Also Read - Lionel Messi or Cristiano Ronaldo? Former Liverpool And Man Utd Star Michael Owen Weighs in on Football's Biggest Debate

Philippe Coutinho and Jordan Henderson scored in each half as Edin Dzeko’s equaliser proved helpless in preventing the Citizens from ending the Merseyside club’s 11 game unbeaten run in the league. The result also dealt a huge blow in defending the title as Manuel Pellegrini’s side now find themselves five points behind leaders Chelsea and having played one match more. Also Read - TOT vs MCI Dream11 Team Tips And Predictions, Premier League: Football Prediction Tips For Today’s Tottenham vs Manchester City on November 21 Saturday

Liverpool came into this clash after having put a dismal performance against Besiktas that saw them get knocked out of the Europa League on Thursday. Arriving back in England on Friday morning, Brendan Rodgers’ side didn’t look tired and jaded but were full of energy right from the first whistle. Adam Lallana drilled his chance in the eight minute straight at Joe Hart after being put through on goal by Coutinho.

Man City captain Vincent Kompany looked nervous with last season’s howler coming to haunt him once again. Coutinho pick-pocketed the Belgian, who failed to judge Fernandinho’s pass and played it to Raheem Sterling. The youngster saw Henderson drifting down the left and the Liverpool skipper took a touch towards the right to evade the visiting defenders before curling the ball past Hart at  the far post in the 11th minute.

Sergio Aguero nearly pegged the visitors back on level terms almost immediately but his effort came back off the upright. The Citizens were level in the 25th minute when Aguero unlocked the Reds defence and sent Edin Dzeko through to bag the equaliser. Liverpool could have twice taken the lead but Lallana and Sterling were guilty of missing chances through the remainder of the first-half.

Man City commenced the second half with Aguero sending his header slightly over the crossbar. Sterling could have once again given Liverpool the lead but Zabaleta was alert to prevent the 20-year-old from converting Lallana’s cross in the 52nd minute. Liverpool did get what they were looking for in the 75th minute when Coutinho bettered Henderson’s effort in an identical manner to put the Reds back in command.

It took less than three minutes for the visitors to ring the warning bells but Aguero couldn’t make the most of Martin Skrtel’s poor header. The Argentinean – in search of his 18th league goal of the season – wriggled inside the Reds’ 18-yard box before driving his effort beyond Simon Mignolet’s far post. Daniel Sturridge – playing against his boyhood club – could have put the tie to bed in the 87th minute. Yaya Toure – under pressure from Henderson – passed the ball directly to the Liverpool striker, who fired wide.

Nervous moments ensued for the Anfiled faithful but Silva ad Aguero failed to find the target in the dying minutes; thus witnessing Man City suffer another blow in the title race. Liverpool’s top-four credentials face a staunch test in the coming fixtures as they welcome fourth-placed Manchester United on March 22 before travelling to the Emirates to take on Arsenal.