From 'misleading', 'negligence' to 'fake', social media started was activated.

Former World Cup-winning captain Imran Khan is all set to become Pakistan’s next Prime Minister, but according to a BBC Newsnight gaffe, it is Wasim Akram to is the next PM. The British Broadcasting Centre faced the heat after they confused Imran Khan with Wasim Akram and showed clips of Akram bowling to refer back to Khan’s career in cricket.

The video soon was spotted by social media detectives and trolls as expected followed. From ‘misleading’, ‘negligence’ to ‘fake’, social media started was activated. 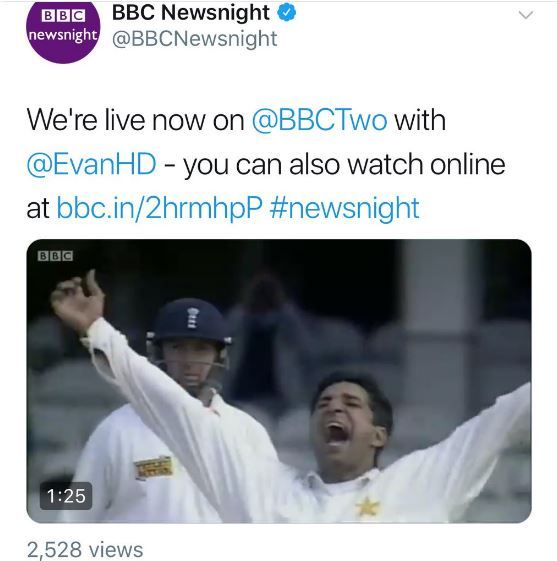 Among those watching it live, was Justice Secretary David Gauke, who shared a photo of his TV screen on Twitter and wrote, “#Newsnight seem to have got Wasim Akram and Imran Khan muddled up.” While many asked if to them “all brown people look the same”.

#Newsnight seem to have got Wasim Akram and Imran Khan muddled up. pic.twitter.com/PqIlo4wqq0

Here are how some of the other trolls reacted:

Just in case you thought you dreamt it, they did just confuse Wasim Akram and Imran Khan. Worth a chuckle as you hand over your license fee… pic.twitter.com/cZx2gccptd

You know what I love about the British media? They NEVER let you down. Here I was thinking “why are they showing footage of Wasim Akram?!” and then I realised, “Oh yeah… they think it’s Imran Khan, because they all look the same…”

Imran founded the party in 1996, four years after retiring from international cricket, his last act the final wicket in Pakistan’s memorable – and so far only – World Cup win in 1992.