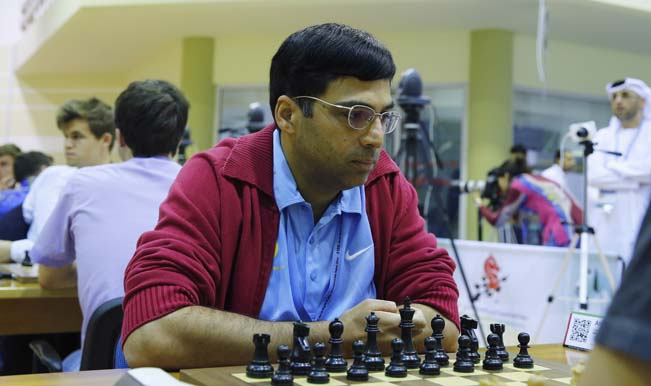 Bilbao (Spain), Sep 16: Five-time world champion Viswanathan Anand cashed in on his chances to put it across Francisco Vallejo Pons of Spain in the second round of Bilbao Final Masters here. Anand displayed his technical prowess and had Vallejo off-track with some brilliant ideas in the game and even though it would go down as a blunder by the Spaniard it was clear that the Indian ace plotted it. Also Read - Legends of Chess: Viswanathan Anand Suffers Eighth Defeat to End Disastrous Campaign

Maintaining a clean slate after two games, Anand took his tally to six points under the soccer-like scoring system in place here and the Indian will now take on Levon Aronian of Armenia in what seems like an early summit clash in the four-players double round-robin tournament. With four games still to play, Aronian kept himself in contention with a technical demolition of Ruslan Ponomariov of Ukraine in the only other match of the day. Also Read - Legends of Chess: Viswanathan Anand Loses to Ding Liren, Slumps to Seventh Defeat

As things stand, Anand on six points is followed by Aronian on four, followed by Vallejo Pons who just has one point to his credit. Ponomariov, who lost to Anand in the opener, is reeling at the bottom yet to open his account. Anand made his intentions clear for a fighting game by going for the sharp Ragozine defense as black against Vallejo.

“Basically we played a very interesting theoretical line where white has a very dangerous pawn in return for the exchange, my impression was it was balanced throughout, can’t be sure without checking,” said Anand in the post-match conference. The opening was sorted in favour of Anand as Vallejo had not expected this and Anand piled on the pressure to win a rook for a Knight as the game progressed. The technicalities, however, were far over as Vallejo had a dangerous passed pawn and Anand agreed that the Spaniard blew it up in one move.

“I thought I found this right manoeuvre not to get worse, and then suddenly my opponent got a bit confused (as) he was quite a bit short of time, the problem for him was that he blundered the game away in one move so he was quite unlucky,” Anand said matter-of-factly. Anand gave nothing away on the forthcoming world championship match against Magnus Carlsen slated in November this year.

When asked if this second victory was significant for his match Anand said, “Let’s not get ahead of ourselves, I am obviously happy with the win and I will take it from there.”

In the other game of the day, Aronian came up with a clinical approach to demolish former FIDE world champion Ponomariov. Getting a slight edge out of the opening, Aronian converted to a queen and opposite coloured Bishops endgame wherein Ponomariov was saddled with a tough task of defending and the Armenian cruised through with some fine technical manoeuvres.