Blast outside Gaddafi Stadium during Pakistan vs Zimbabwe ODI: Is Pakistan a safe bet for cricket still?

An alleged suicide blast near the Gaddafi stadium in Lahore where a cricket match was being played between Pakistan and Zimbabwe once again raised questions over security arrangements for cricketers in Pakistan. 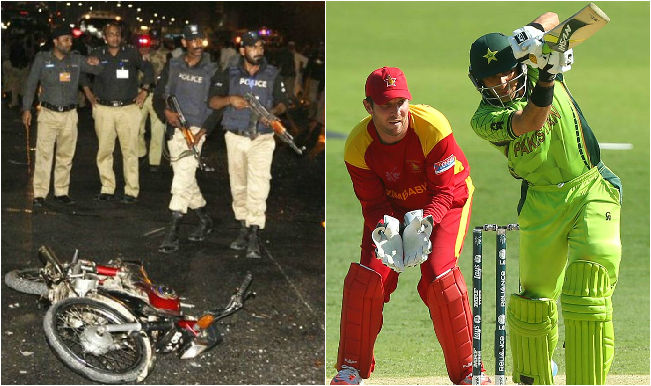 An alleged suicide blast took place near Gaddafi stadium in Lahore, Pakistan where Pakistan and Zimbabwe were playing their 2nd One Day International (ODI) match. In a day-night ODI match which Pakistan won comprehensively, the blast took at 9 pm. The blast has again raised questions over security arrangements for cricketers in Pakistan. In a major breach of security, a suicide bomber blew himself near Kalma Chowk less than a kilometer away from the ground. A policeman died on the spot while four others were injured in the blast. Soon after the blast, the Pakistan Cricket Board (PCB) issued a statement denying any reports of terror attack, but it seems that Pakistan is still not safe! (Also read: Pakistan vs Zimbabwe 2015: Blast near Gaddafi stadium during match kills policeman) Also Read - Pakistan Court Sends 3 Accused To Jail in Forced Conversion Case

After six years, on the assurance from Pakistan Cricket Board, Zimbabwe Cricket (ZC) agreed to send their players for two Twenty20s and three ODIs. Despite a grave warning from a major players’ group, Zimbabwe team came Pakistan to play cricket. Before the tour, ZC Managing Director Alistair Campbell visited Lahore and said that Pakistan has “left no stone unturned to make sure that we will be safe.”

One can see what kind of measurements Pakistan have taken. If the blast near Gaddafi stadium was a ‘power transformer blast’ and not a terror attack, as reports suggest, then too no International Cricket Council (ICC) associated team would want to take a risk and play in Pakistan. After the recent blast, Pakistan would find hard to convince other cricket teams for playing in their country. Even after the Zimbabwean players being given a Presidential cover throughout the tour, the supposedly terror attack will hurt Pakistan more.

With the insurgency of Taliban in Pakistan and other terror outfits, and failure of security forces in preventing attacks, Pakistan is still not the best bet for playing cricket!