A British woman aged 32 died while celebrating England’s win against Colombia in the Round of 16 match where England won via penalty shootout. The woman was a stewart by profession. The lady named Rebecca Boyle is believed to have suffered a neck injury after a night of drinking in the Italian Riveira port town of Imperia on Tuesday night. Also Read - Kevin Pietersen TROLLS Brazilian Striker Neymar in The Most Hilarious Way Possible Over His Diving Antics -- WATCH

This is not the first fan death during the ongoing FIFA World Cup 2018. Earlier an Argentinian fan in India passed away after Argentina’s poor performance in the first two group stage matches. He was a Messi fan and also left a suicide note. This just shows how the game of football touches lives. Also Read - FIFA World Cup 2018 Quarter-Finals: Teams, Fixtures And Match Timings

Here are some of the pictures of the latest. 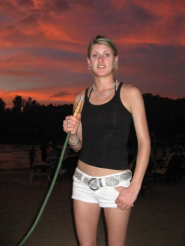 A police spokesman told The Sun:”We have seen the reports that she was out celebrating England’s win in town but at this stage we cannot say if drink played a part because no autopsy has been carried out. At this stage it is to early to say and her death is being treated as unexplained. We cannot yet rule out third party involvement.”

(With inputs from The Sun)