Real Madrid coach Carlo Ancelotti on Friday brushed aside rumours which point to Saturday's final La Liga game of the season being his last with the club. 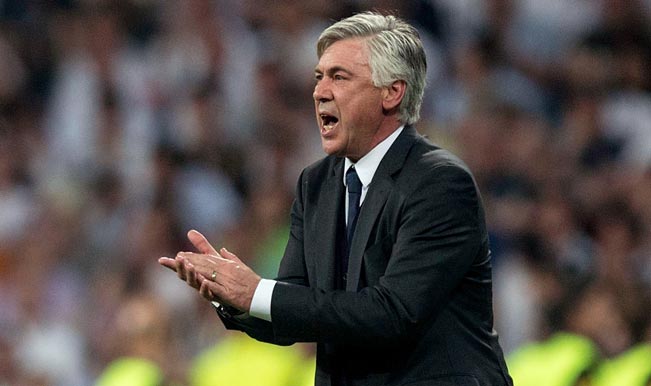 Madrid: Real Madrid coach Carlo Ancelotti on Friday brushed aside rumours which point to Saturday’s final La Liga game of the season being his last with the club. Ever since Real crashed out of the semi-finals of the Champions League 10 days ago and Barcelona won the La Liga title last Sunday, the press have been rife with rumours that Ancelotti will be sacked and replaced by either Rafael Benitez or Jurgen Klopp, reports Xinhua. That is a very different impression from that given by the Italian. Also Read - Lionel Messi Edges Past Cristiano Ronaldo's Free-Kick Record as Barcelona Beat Granada 4-0

“My feeling is that I’m going to stay. The club is assessing things and I’m excited about the idea of staying because I like the club and the city,” said Ancelotti, who admitted nobody at Real had discussed his future. Also Read - Lionel Messi's Son Mateo Celebrates Barcelona Football Captain's Free-Kick During LaLiga Game vs Granada, Video Goes Viral | WATCH

“I haven’t spoken to the club yet, nor has the club spoken to me. I’ll continue to see myself as the Real Madrid coach until the club tells me otherwise,” he added, giving a date for when his future could be decided.

“We’ll sit down to discuss my future and the club’s future on Sunday or Monday,” commented Ancelotti, who looked back at a campaign in which Real ended without either the Spanish league or Cup or the European Champions League, despite an incredible run of 22 consecutive wins at the end of 2014.

“The first half of the season was record-breaking. We could have done better in the second half. We fought to the end but have ended up without a trophy,” he admitted in the pre-game press conference.