Cape Cobras registered the first tie in this years CL T20 tournament against the Barbados Tridents. 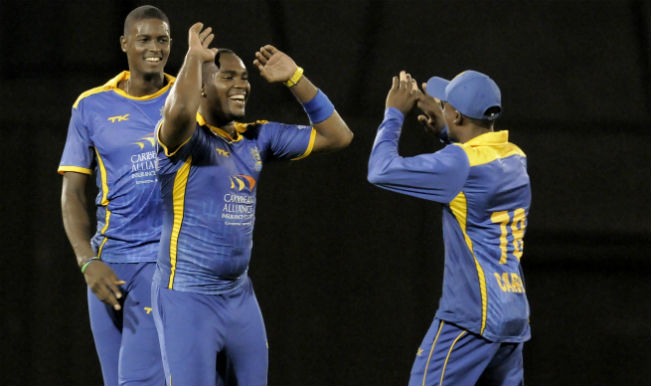 Cape Cobras registered the first tie in this years CL T20 tournament against the Barbados Tridents. Chasing a total of 175, the Cobras got off to an exceptional start as Richard Levi and Hashim Amla blasted the new bowlers in the powerplay overs, adding 65 runs in it. Levi in particular was rather harsh on the bowlers and especially Jason Holder, whom he blasted for 26 runs in a single over, hitting 2 fours and 3 sixes in it. Also Read - BAR vs SLZ Dream11 Team Prediction CPL T20 2020: Captain, Fantasy Cricket Tips For Today's Barbados Tridents vs St Lucia Zouks Match at Queen’s Park Oval, Trinidad 7:30 PM IST August 30
Levi was ultimately dismissed by Hossein, who happened to pick up his first t20 wicket, at the score of 39. Although once again he was dismissed after getting off to a good start, Levi has made sure that his team has the perfect platform to make a move in the game.
Although Levi departed, Amla made sure that the scoring rate never came down and the Cobras added 89 runs in the first 10 overs, losing just 1 wicket in the process. Hashim Amla made his first noticeable contribution of the tournament, adding 59 runs off just 42 deliveries.  But both Amla and Ramela departed in quick succession, both falling to the spin bowling of Jeevan Mendis.
Once the two batsmen departed, the runrate climbed a bit and reached 10.25 with 4 overs to go. Vilas and Petersen were the two batsmen in the middle and both of the, being able to play the big shot meant that the game would be going down the line, which it did. But Mendis soon picked up Petersen as well as vilas in the same over as he ended his spell with figures of 4/27.
Nurse bowled the 18th over and was hit all round the park as gave away 14 runs in the over. First Englebretcht hit him for a boundary on the 4th delivery and then Justin Kemp dispatched the last ball for a six over mid wicket. With just 18 needed of the last 2 overs, the match looked well in favor of the Cobras at this point of time. But Ravi Rampaul used all his experience and gave just 5 runs in the 19th over, saving Emiret 13 to defend in the last over.
The last over started well for the Tridents as Emiret gave away just 2 from the first 2 deliveries. Englebretcht though got a boundary off the 3rd delivery and then got a doubles off the next 2 deliveries. Cobras needed 3 from the last delivery and Englebretcht managed to score 2 off the last delivery, tieing the game, the first off this tournament.
Earlier, Barbados Tridents scored 174 in their alloted 20 overs, thanks mainly to an unbeaten century from Jonathan Carter and a well timed 42 from Munaweera. They recovered from a disastrous start when they were 7/2 in the 3rd over and went on to score a challenging total.
Also Read - SKN vs BAR Dream11 Team Prediction CPL T20 2020: Captain, Fantasy Cricket Tips For Today's St Kitts and Nevis Patriots vs Barbados Tridents Match at Queen’s Park Oval, Trinidad 7:30 PM IST August 25 Also Read - SLZ vs BAR Dream11 Team Prediction CPL T20 2020: Captain, Fantasy Cricket Tips For Today's St Lucia Zouks vs Barbados Tridents Match at Brian Lara Stadium, Trinidad 7:30 PM IST August 20