Kings XI Punjab recovered from a disastrous start and defeated the Hobart Hurricanes by 5 wickets in their first match of the CL T20 league. 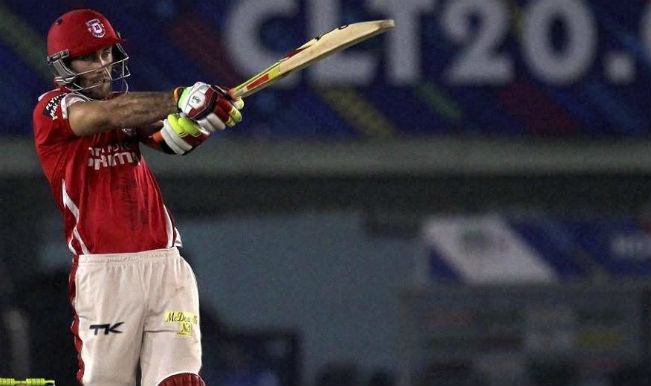 Kings XI Punjab recovered from a disastrous start and defeated the Hobart Hurricanes by 5 wickets in their first match of the CL T20 league. Although the beginning o the innings was disappointing for the Kings XI, some quckfire batting from Glenn Maxwell, Thisara Perrera and George Bailey took them to a rather comfortable victory with 12 deliveries to spare.
Chasing a total of 145, Punjab got off to a terrible start as they lost Virendra Sehwag off the very first ball of the innings on the bowling of Doug Bollinger. Manan Vohra and Wriddhiman Saha looked to counter attack the Hurricane bowling after that but the plan misfired as the Kings XI were soon 23/3 in the 4th over as they lost wickets in consecutive overs. First Saha was dismissed when he was caught off a skyer of the bowling of Bollinger. Just an over later, Hilenhaus had Miller caught at mid off another skyer.
Manan Vohra and Glenn Maxwell tried to steady the ship for the Kings XI as they went off scoring runs at quick pace. Maxwell especially looked at his self best as he started smacking bowlers in and out right from the word go. He started his innings with a six down the ground off the ball of Bollinger and struck another one inside out off the bowling of the leg spinner Boyce.
Maxwell once again got out to the short delivery but he had brought the scoring rate down to 7 by the time he got out. He scored 43 runs off just 25 deliveries with the help of 2 sixes. Manan too fell to the short ball as he was caught at mid off of the bowling of Ben Laugling on the score of 18.
Although Maxwell has played a quickfire innings, the Kings XI were still in a heap of trouble when he departed at the score of 77/5. But George Bailey and Thisara Perera joined hands at this point and didn’t let the run rate slow down a single bit. They scored 16 runs off the very next over of the leg spinner Boyce, who went for more than just a few runs in the entire game.
Thisaa Perera in particular looked in excellent touch as he scored freely and at a very quick pace. He took the momentum of the innings from where Maxwell had left and guided his team safely to victory along with his captain George Bailey. The two batsmen shared a partnership of 78 runs and made sure they suffered no more set backs in the game.
Earlier, Hobart Hurricanes managed to make their way through to 144 runs credit mainly to some exploits in the middle order by Travis Birt and Wells. The Punjab bowlers bowled excellent line and length during the end of the innings with Thisara Perera and Akshar Patel leading the way with some very miserly bowling.
Also Read - Richa Ghosh Becomes Seventh Indian to Play in WBBL, Signs For Hobart Hurricanes Also Read - It Was The Best Day of My Life, Says Manzoor Dar On Meeting Harbhajan Singh Also Read - Aaron Summers involved in shocking child abuse racket