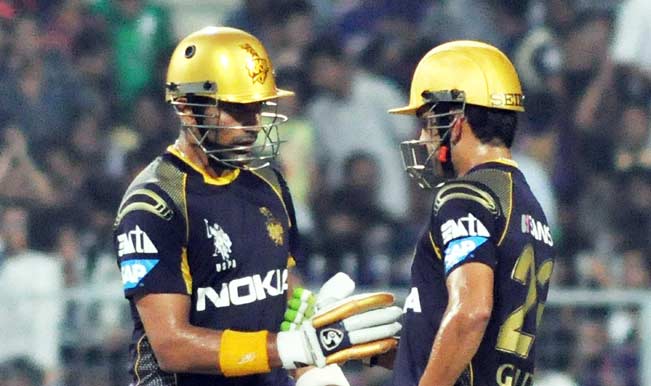 Gautam Gambhir and Sunil Narine starred as Kolkata Knight Riders (KKR) beat Lahore Lions (LL) in Champions League T20 (CLT20) 2014 Match 7 Group A at Hyderabad on Sunday. For long periods of time in the match, it was a one-sided contest. But like any other India-Pakistan cricket encounter, this too had its set of twists towards the end. It had a thrilling finish, the usual contest between bat and ball and a topsy-turvy nature. In the end Kolkata Knight Riders won by four wickets with three balls to spare Also read: Check the Points Table of the Group Stage of Champions League T20 2014 (CLT20) Also Read - IPL 2020: Trent Boult's Inclusion And Suresh Raina's Absence Give Mumbai Indians Edge Over MS Dhoni's Chennai Super Kings, Says Gautam Gambhir

Gautam Gambhir and Robin Uthappa put on a 100-run stand for the opening wicket before the latter lost his wicket. Gatam Gambhir soon followed him to the dugout after completing his fine half-century. Manvinder Bisla, who came in at No 3, too followed the opening duo soon managing to score just six runs off eight balls. Three more wickets fell and the match went till the last over. Apart from the mini-collapse, Kolkata Knight Riders never looked in trouble while chasing down the score of 152 runs. Also Read: Champions League T20 2014: Complete squads of all teams of CLT20 2014 Also Read - IPL: All The Major Numbers From The Previous Season

Earlier in the day, Kolkata Knight Riders skipper Gautam Gambhir won the toss, and as per the trend in the tournament so far, elected to field. Nasir Jamshed was back to his usual opening position alongside Ahmed Shehzad. While the latter scored freely and looked in good touch, Shehzad was struggling during his stay at the crease. He could manage only 10 runs off 16 balls. Wickets continued to tumble from the other end. Champions League T20 2014 Schedule: All Match Fixtures and Complete Time Table of CLT20 2014

Sunil Narine wrecked havoc with his four overs, giving away just nine runs and picking up three wickets. The problems he was posing to the Lahore Lions batsmen tempted gautam Gambhir to bring in close in fielders even at the death overs. Lahore Lions eventually needed some power-hitting by Umar Akmal and Wahab Riaz towards the end of the innings to take the Pakistan side past the 150-run mark.

One of the saddest features of the match was the quality of fielding. In a competition, that by concept is the battle between the best T20 sides in the world, was witness to some poor fielding standards. Winners of the T20 competition from India and Pakistan put up a disastrous showcase. While Kolkata Knight Riders were ordinary in the field, Lahore Lions, in mild terms, were pathetic. There were way too many misfielding and dropped catches in the match.