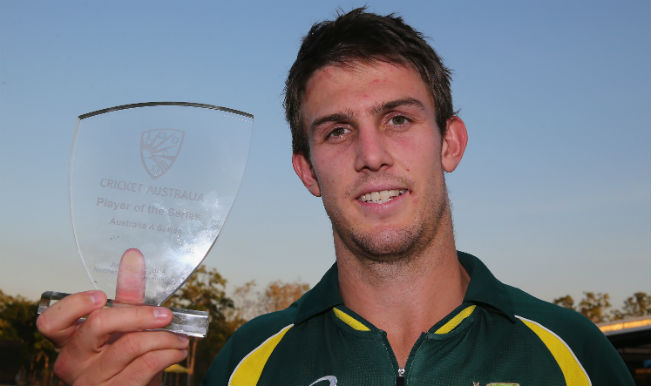 Ther final six sparked off wild celebrations as it turned out to be a disappointing end for the unfancied Dolphins, who were favourites till final two deliveries of the match. It was ironical that Frylinck, who himself while batting hit two sixes off Yasir Arafat during the last over of the Dolphins innings, couldn’t defend those two big hits, when he came on to bowl the final over in the Scorchers innings. Also Read - Mitchell Marsh Wins Twitterverse With His All-Round Show During 4th T20I vs West Indies

Predictably, Marsh was awarded man-of-the-match award for his 40 off 26 balls with three fours and two sixes. For Scorchers, the foundation was laid by a 55-run partnership for the second wicket between Craig Simmons (48, 36 balls) and Sam Whiteman (45, 32 balls). Simmons’ innings had five fours and two sixes while Whiteman smashed six boundaries apart from a six. Also Read - IPL 2021: Big Blow to MS Dhoni-Led CSK as Josh Hazlewood Withdraws From Season

It was further consolidated by a third wicket stand of 49 off six overs between Marsh and Whiteman. However it was Ashton Agar (15), who joined Marsh as the duo upped the ante towards the end before Marsh ended with a bang with those two maximums. Earlier, Dolphins overcame a top-order collapse to put up a fighting 164 for seven after opting to bat.

Khaya Zondo anchored the Dolphins innings with a well-crafted unbeaten 63 off 50 balls which consisted of seven boundaries while Keshav Maharaj (29) was the second highest scorer. The Dolphins lifted their game during the final quarter of their innings as they hammered 67 runs in the last six overs after being reduced to 97 for six at the end of the 14th over.

It was Frylinck, who hit two huge sixes off Pakistani paceman Yasir Arafat, to take Dolphins’ score past 160-run mark. However, it was 24-year-old Natal batsman Zondo, who came in at No 5 and batted till the end. He was especially severe on Jason Behrendorff (3/46) as four of his seven boundaries came off the left-arm seamer’s bowling. Zondo also used his feet well against veteran chinaman bowler Bradd Hogg as he danced down the track to help himself to a couple of boundaries.

With skipper Morne van Wyk (4), Cameron Delport (8) and Cody Chetty (0) back in the dressing room with scoreboard reading 12, Zondo in company of Maharaj, stemmed the rot adding 32 runs for the fourth wicket. Glovesman Daryn Smit (21) also added valuable 30 runs with Zondo, who held one end up initially. However it was the final flourish that made the total look respectable.