The ten teams of the eighth edition of Champions League T20 have been divided into two groups – Group A and Group B. 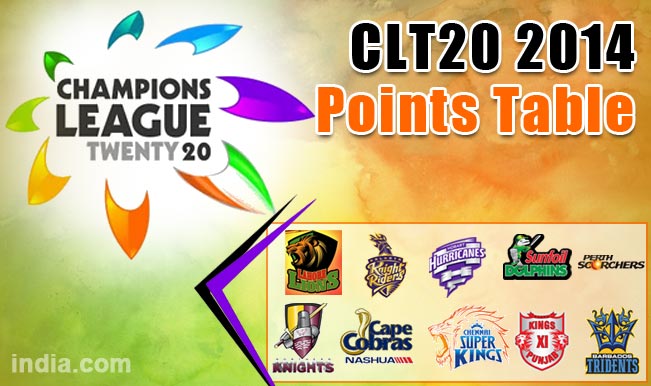 The last match of Group A in Champions League T20 2014 saw Perth Scorchers beat Lahore Lions by three wickets and would help Chennai Super Kings join Kolkata Knight Riders in the semifinals from group A. KKR finished as Group A points table toppers with 16 points while CSK came second with 10 points. Perth Scorchers, Lahore Lions and Dolphins finish with third, fourth and fifth place respectively. In Group B, Kings XI Punjab and Hurricanes Hobart have already qualified to semifinals with 16 and 12 points respectively. Match between Northern Knights and Barbados Tridents would mark the end of group stage matches of Champions League T20 2014. Also Read - India vs West Indies 2014: Sunil Narine withdrawn from West Indies squad after being reported over illegal bowling action

The ten teams of the eighth edition of Champions League T20 have been divided into two groups – Group A and Group B. Group A consists of Kolkata Knight Riders, Chennai Super Kings, Perth Scorchers, Dolphins and Lahore Lions while Group B consists of Kings XI Punjab, Hobart Hurricanes, Cape Cobras, Barbados Tridents and Northern Knights. The Group Stage just like the Qualifying Stage will follow the round-robin format where the five teams in each group will play each other from September 17 to October September 30. The top two teams with highest points at the end of the matches will advance to semi-finals that would be played on October 2 also taking place at Rajiv Gandhi International Stadium, Hyderabad. Also Read - Chennai Super Kings (CSK) beat Kolkata Knight Riders (KKR) in CLT20 2014 final: 7 interesting stats

Champions League T20 2014 qualification and points table format does not follow the one like of IPL as they have two separate Groups where the top two teams from each group advance to semi-finals, as for in IPL the top four sides leading the points table made to semis. The points awarded remain same with 4 points for a Win, 2 points in case of No Result and 0 points for a Loss.

The Champions League T20 2014 Points Table has been updated till Lahore Lions vs Perth Scorchers match played on September 30.