Kings XI beat the Northern Knights on the back of some extraordinarily attacking batting and excellent bowling, booking themselves a place in the semifinals. Thus they become the second team to enter the semi finals after the Kolkata Knight Riders. 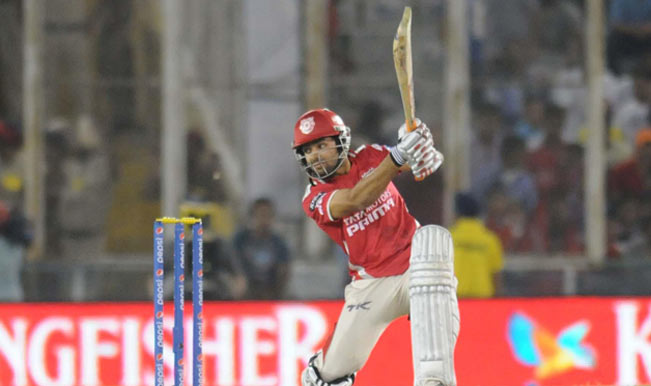 Kings XI beat the Northern Knights on the back of some extraordinarily attacking batting and excellent bowling, booking themselves a place in the semifinals. Thus they become the second team to enter the semi finals after the Kolkata Knight Riders. They reduced the Knights for only 95 runs and registered one of the biggest victories in CL t20 history.

Chasing a total of 215 was always going to be tough and the start itself was disastrous for the knights.  Anureet Singh picked up the wicket of Dan Harris in the second of the innings as he was caught behind by Saha. Kane Williamson and Anton Devcich tried to keep up withnthe required rate as they added quick runs for the second wicket. They added 48 runs in just 25 deliveries for the second wicket, giving some hope to the knights fans.

But Kane Williamson couldn’t live up to the asking rate of the target set by the Kings XI as he was out LBW in the 6th over trying to play a pedal sweep. He made 20 of 15 deliveries and his dismissal triggered a collapse that ultimately led to their defeat. From 58/1, the knights were reduced to 95 all out, losing the rest of their wickets for just 37 runs.

The pick of the bowlers were Kanranveer Singh and Akshar Patel, the duo spun a web around the Knights Middle order and the Knights batsman fell into it like common fly. Akshar Patel picked up 2/16 while the leggie, Karanveer Singh picked up 4/16. Both of them literally destroyed the middle and lower middle order of the knights, registering a huge victory for the Kings XI.

The win now safely puts the Kings XI in the semi finals with three wins from three games. The Knights on the other hand have a hard nut to break now as a couple of thumping defeats in their last 2 games means that they are almost out of the tournament. They need a miraculously huge victory in their next game to make amends of their two huge loses.