Chennai Super Kings (CSK) reached 155 for six in 20 overs against Perth Scorchers (PRS) in Group A Match 15 of Champions League T20 (CLT20) 2014 at M Chinnaswamy Stadium in Bengaluru on Saturday. 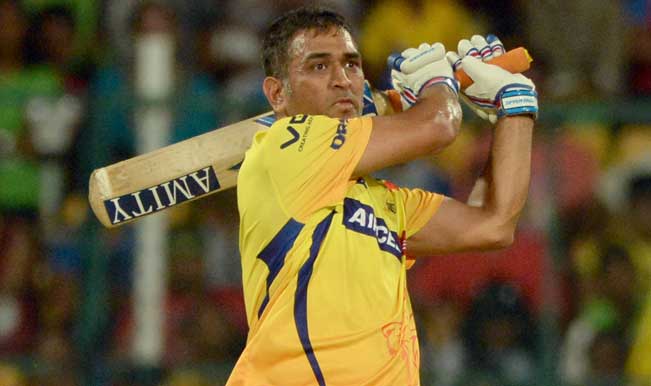 Chennai Super Kings (CSK) reached 155 for six in 20 overs against Perth Scorchers (PRS) in Group A Match 15 of Champions League T20 (CLT20) 2014 at M Chinnaswamy Stadium in Bengaluru on Saturday. The Perth Scorchers bowlers made good use of the conditions to restrict the Chennai Super Kings batsmen early on. However, Mahendra Singh Dhoni and Ravindra Jadeja put on a quickfire half-century stand for the sixth wicket to take the team past the 150-run mark. Also Read - IPL 2020: Sanju Samson Says he Can Never Think of Playing Like MS Dhoni

Earlier in the day, Perth Scorchers skipper Adam Voges won the toss and elected to field. The pitch was unlike the flat surface normal found in the stadium. However, constant rainfall over the last few days resulted in the ball stopping and gripping after it pitched. However, Chennai Super Kings got of to a good start with Brendon McCullum taking on the bowlers before his brief innings came to an end when he inside edged Joel Paris’s delivery on to his stump.

Suresh Raina followed soon after a miscommunication between him and Dwayne Smith led to his run out. Mithun Manhas, who had come in for Faf du Plessis looked out of sorts, failing to middle the ball and getting too many edges while looking to up the run rate. Dwayne Bravo and Dwayne Smith too couldn’t score at a healthy pace.

Slow left-arm bowlers Michael Beer and the veteran chinaman Brad Hogg made life tough for the Chennai Super Kings batsmen to get their act going. Losing wickets at regular intervals too didn’t help the team’s cause. However, Ravindra Jadeja and skipper Mahendra Singh Dhoni managed to hit some lusty blows towards the end to take the former CLT20 champions to a respectable total. Dhoni took a liking to Yasir Arafat in the penultimate over of the innings hitting him for three consecutive sixes. Even as it was a 15-ball knock, it could well prove to be the difference from the point of view of the outcome of the match.