An unstoppable Kolkata Knight Riders stretched their winning streak to a record 12 after the reigning IPL champions edged past Perth Scorchers by 3 wickets to all but confirm their semi-final spot in the Oppo Champions League Twenty20, here today. 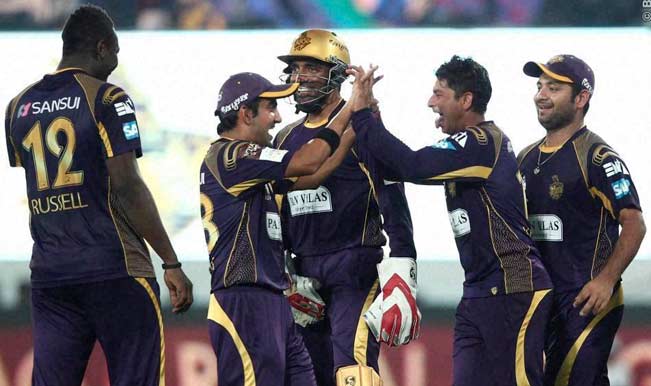 Hyderabad, Sep 24: An unstoppable Kolkata Knight Riders stretched their winning streak to a record 12 after the reigning IPL champions edged past Perth Scorchers by 3 wickets to all but confirm their semi-final spot in the Oppo Champions League Twenty20, here today. Chasing 152 for win, KKR lost early wickets but Suryakumar Yadav (43 not out) and Yusuf Pathan (21) stitched a 38-run sixth-wicket partnership to help them achieve the target in 19.4 overs and set a domestic record of 12 straight wins. Also Read - IPL Team Preview: Kolkata Knight Riders Look Balanced, Have to Arrest Inconsistency

Earlier electing to bat, Scorchers rode Adam Voges’ unbeaten 71 to post 151 for seven in 20 overs as KKR off-spin ace Sunil Narine (4-31) and left-arm chinaman Kuldeep Yadav (3-24), who got the Man of the Match award, succeeded in containing the Australian Big Bash champions from getting a big score. KKR had an inauspicious start after skipper Gautam Gambhir (2) was caught at point off Joel Paris (1-19) in the second over and soon Jason Behrendorff (1-28) got Jacques Kallis to flick one straight into the hands of Craig Simmons at short fine leg. Also Read - IPL 2020: Ali Khan Becomes First Player From USA, Joins Kolkata Knight Riders as Harry Gurney's Replacement

Robin Uthappa (23) did try to hang around but was caught behind after trying to chase a rising delivery off Nathan Coulter-Nile (2-41). Manish Pandey (24) also tried to give some stability to the innings but fell to a perfect Coulter-Nile yorker in the 11th over. Dutch star Ryan ten Doeschate, who had a big role to play in the opening win against Chenni Super Kings, couldn’t last long either as he fell to Yasir Arafat (3-39) and put KKR in a bit of trouble at 87 for five.

Yusuf, who injured his foot in the 17th over, carried on with some strapping but was holed out at deep mid-wicket as Arafat picked up his second scalp. But Suryakumar, whose 19-ball knock was laced by a four and 4 sixes, ensured that KKR register their third successive win in the tournament so far even after Andre Russell (4) was cleaned by Arafat on the first ball of the last over.