Marcos Baghdatis helped Pune Marathas clinch the game with a bonus point in tie-breaker as the five set affair ended 24-24. 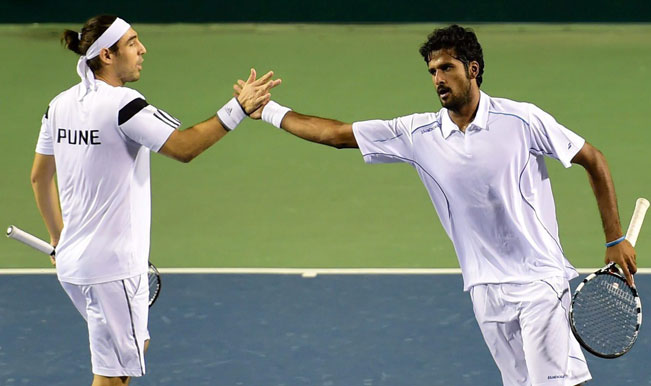 Bangalore, Nov 20: Pune Marathas made a remarkable recovery from 0-2 down to win their next three matches in a row as their contest against Bangalore Raptors ended in a thrilling tie to run away with a bonus point in the Champions Tennis League here on Thursday. Marcos Baghdatis played superb tennis against Feliciano Lopez to win the super tie-breaker as the five-match contest ended 24-24 at the Karnataka State Lawn Tennis Association Stadium. Also Read - Maria Sharapova congratulates mother-to-be Serena Williams

Both played their hearts out and hardly showed any signs of fatigue as they played three — the mixed doubles, men’s doubles and men’s singles — of the five sets of the fixture. It was the Cypriot Baghdatis who prevailed over Spaniard Lopez in a nerve-wracking encounter which saw each of them refusing to yield any inch. While the Spaniard produced some exquisite flat returns, Baghdatis regaled the the motley spectators with his fine overhead placements. Also Read - 'Cheater' Sharapova should not play tennis again: Bouchard

All eyes were on the men’s singles as Bangalore enjoyed a wafer-thin 19-18 lead, but Baghdatis spoiled the rhythm of Lopez with some exquisite forehand cross court winners to break the Spaniard in the fifth game and take the score to 21-21. Both the players kept their serves with the scoreline reading 5-5 and Baghdatis eventually won the tie-breaker 5-3. Bagdatis and India’s Saketh Myneni then defeated Lopez and Ramkumar Ramanathan of India 6-4 in men’s doubles.

The American had herself to blame as she could not break the young Polish player. Both Radwanska and Williams held their serves until the Polish broke the American in the eighth game. Williams also had a wonderful chance of breaking Radwanska, but failed, as she committed crucial unforced errors, hitting into the net and smashing out.

Radwanska fought her way back in the ninth game, from 0-40 down, to pocket the game and the match. She played cleverly and made Williams run around and forced her opponent to play to her strengths.

Enqvist regaled the spectators with his familiar shots and took an early 2-1 lead after he broke Australia’s Pat Cash in the singles legends’ clash. Enqvist did not give any room for the veteran Cash to make a comeback of any sorts. The agile Enqvist maintained his tempo and won the match 6-3. In the mixed doubles, the second match of the tie, Williams and Lopez overwhelmed Radwanska and Marcos Baghdatis 6-3 after the Bangalore pair took an early 3-2 lead breaking the rival combo in the fifth game.

Lopez served well and Williams capitalised on her famous baseline smashes and volleys. Both Baghdatis and Radwanska proved no match to the power game by Williams and delectable serves of Lopez. The final result is decided on the basis of aggregate score of the five-match tie. The five matches are in the category of Legends (singles), Mixed Doubles, Women’s Singles, Men’s Doubles and Men’s Singles.