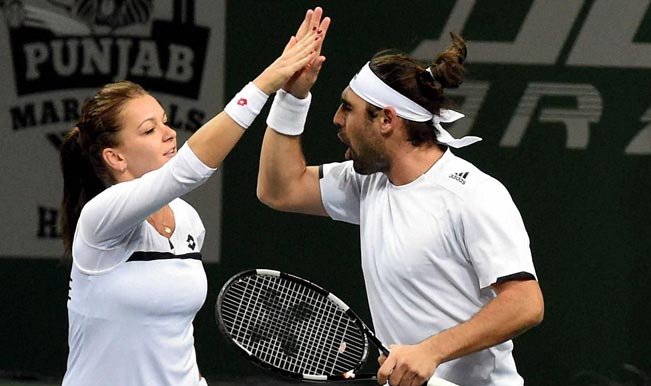 New Delhi, Nov 26: Cyprus star Marcos Baghdatis subdued world number 16 Kevin Anderson in the crucial men’s singles as Pune Marathas lifted the inaugural Champions Tennis League (CTL) trophy with a 27-23 victory over Delhi Dreams in the final, at the R.K. Khanna Tennis Complex in New Delhi. Anderson served big but Baghdatis used all his experience to nail a 6-3 win in the final match. The 2006 Australian Open finalist hit a forehand winner on the first match point to seal the championship for his side. Also Read - Tennis star Martina Hingis spotted in saree at CTL 2015 opening event

Delhi lost four matches of the five with only Juan Carlos Ferrero winning the legends singles against Pat Cash but the hosts fought tooth and nail in all their defeats and had the rivals under pressure all the time. With three wins in a row, Pune carried into the final match a narrow one-point advantage as they led 21-20. Anderson had the opportunity to even out the lead when he had a break point in the very first game of the final match but Baghdatis saved that. Also Read - Free entry for Punjab Marshalls CTL matches in Chandigarh

The Cyprus star, the 2006 Australian Open finalist, handed the South African two break points when he netted a backhand slice. Baghdatis saved the first but his forehand went over the lines on the second, much to the delight of the home team. However, that joy was short-lived for Delhi as Anderson dropped his serve in the next game when his single-handed backhand kissed the net. It was 2-2. Baghdatis again broke the South African in the eighth and served out the match.

Earlier, Pat Cash was at his entertaining best in a 3-6 defeat against Juan Carlos Ferrero. The 49-year-old threw his bandana in the stands and later went and sat in the rival camp during the game break. The 1987 Wimbledon champion, egged on by a few fans who traveled from Pune to the capital, lost but he did a good job by giving three points to his side.Sanam Singh and Jelena Jankovic then lost the very tight mixed doubles match against the Pune combo of Marcos Baghdatis and Agnieszka Radwanska. It went to tie-breaker, where the Pune players erased a 1-3 deficit and clinched the issue by reeling off four points in a row.

As the tie progressed, more and more Pune fans gathered in the stadium, making the Pune players feel at must have felt at home with their vociferous chants of “Pune-Pune” and the shouts of “Marcos-Marcos-Radwanska-Radwanska”.

In the women’s singles, Jankovic and world number six Radwanska largely restricted themselves to baseline play. They traded breaks in the first four games as Radwanska packed a lot power in her strokes while Jankovic tried to negate that with some variation. Now going into the men’s doubles the two teams were on equal points 15-15.

It turned out to be cracker of a contest in an electrifying atmosphere with fans cheering and dancing on ‘Dhol’ beats. Delhi’s Sanam Singh was the shortest player on the court of the four but his work at the net was terrific. He complimented the 6:8′ tall Kevin Anderson perfectly. However his serve was attacked by the Pune combine of Saketh Myneni and Baghdatis.

Myneni was serving bombs but it was his serve which got broken first in the fifth game. However, Pune nullified the advantage when they broke Sanam in the eighth. The match was stretched the tie break, in which the Pune team prevailed 5-2. The winning team received Rs one crore while Delhi Dreams got 50 Rs lakh cash prize. Baghdatis was named most valuable player of the league while his Pune teammate Saketh Myneni got the award of best performance by an Indian.