Diego Costa scored a controversial opener and Eden Hazard added the second for The Blues. 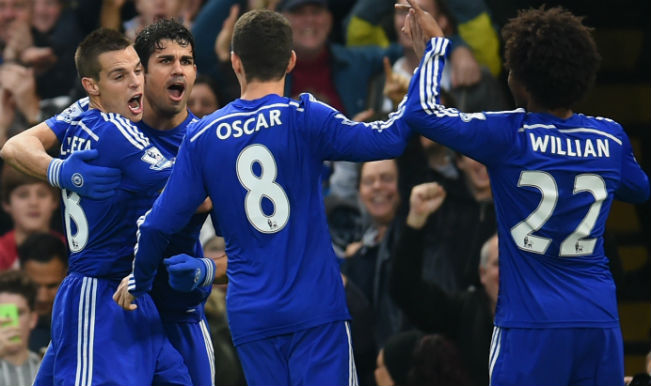 Cruise Control — It probably sums up the control Chelsea have had on the league and after 12 league games, the London giants still sit pretty at the top, winning 10 and drawing against the two Manchester clubs. West Bromwich Albion had rings drawn all around them at Stamford Bridge and could have nearly shipped in a dozen goals but the rampant Blues chose to wear their opponents down as were content with a 2-0 win. Also Read - MUN vs TOT Dream11 Team Tips And Prediction Premier League 2020-21: Captain, Fantasy Playing Tips And Predicted XIs For Today's Manchester United vs Tottenham Hotspur Football Match at Old Trafford, Manchester 9 PM IST Sunday October 4

There was only one team in the contest right from the onset as Chelsea played gorgeous football and held the ball with authority. It was the Cesc Fabregas-Diego Costa combination yet again that bought the first goal. The Spanish striker was marginally offside when he received the lob from his erstwhile compatriot and buried the ball in the net. The Costa juggernaut continued to roll despite his recent injury concerns. Also Read - ARS vs SHF Dream11 Team Prediction Premier League 2020-21: Captain, Vice-captain, Fantasy Tips, Predicted XIs For Today's Liverpool vs Arsenal Football Match at Emirates Stadium 6.30 PM IST Sunday October 4

Chelsea were relentless and pressed for more and were rewarded when the brilliant Eden Hazard smashed the ball low and into the net.

“The first half was brilliant, beautiful,” beamed coach José Mourinho. “Our football was high quality, another dimension. We were playing so well, so fast, so fluid. We made the pitch very wide and created spaces to play inside and scored two goals. We should have scored much more than that. It was fantastic”, Mourinho was quoted by The Guardian.

Claudio Yakob was given his marching orders in the second half and that’s when Chelsea sat back and conserved their energy for more tricky encounters that awaits them. As for the English Premier League (EPL), some sections have already dubbed it a foregone conclusion as Chelsea negotiated some of the trickiest fixtures with the aura of title champions.