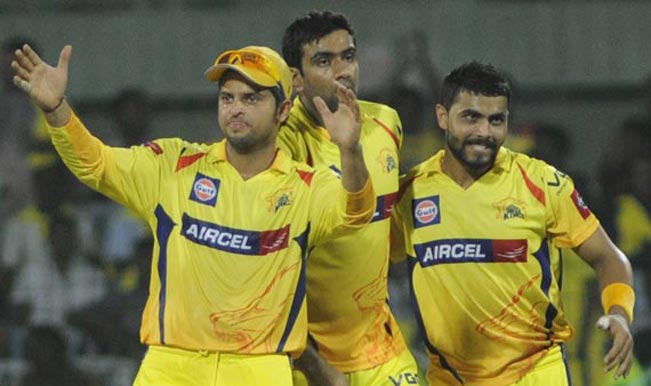 Bangalore, Sep 26: Left disappointed after their Group A match of the Oppo Champions League Twenty20 was washed off without a single ball being bowled against Lahore Lions, Chennai Super Kings would be looking to shut out Perth Scorchers tomorrow to book their last-four spot. The Mahendra Singh Dhoni-led team stays on second spot with six points in three games, after getting two from yesterday’s match, while Lahore had registered their first points on board after losing their opening encounter to table-toppers Kolkata Knight Riders. Also Read - RR vs CSK Dream11 IPL 2020 Predicted Playing XI, Pitch Report And Sharjah Weather Forecast For Match Four

Chennai had lost their first match against KKR before defeating the South African T20 champions Nashua Dolphins, who are winless from their two games. While Kolkata already qualifying from Group A, Scorchers have one win and a loss in their two games played. Lahore and Dolphins will really have to play out of their skins in their respective matches to hope for a turnaround in fortunes. Also Read - IPL 2020, Match 4 Preview: Rajasthan Royals vs Chennai Super Kings

Dhoni would like to see the in-form Suresh Raina, who blazed his way to a 43-ball 90 against Dolphins, to continue with his blitzkrieg and make Chennai’s case stronger to storm into the knockout stage. Chennai, who blazed their way to set an imposing 242 for six in 20 overs against Dolphins, would love to exploit the placid Chinnaswamy pitch against the Australian side. Also Read - IPL 13: CSK Batsman Ruturaj Gaikwad Recovers From Coronavirus, Back in Training After Clearing Two Tests

The West Indian and Chennai T20 opener Dwayne Smith, who had a pretty good season last IPL, would like to make amends as he had failed to make any impression with his bat in the last two matches. However, Brendon McCullum found his groove by hammering a quickfire 49, which gave a launching pad for Raina and Co. To post a massive total for Dolphins to chase. McCullum and Smith would also look to join the party after failing to contribute much in earlier matches.

However, the weather forecast for Bengaluru is not good. There are chances of thunderstorms and rain during the match, which will keep both captains worried ahead of this crucial encounter. Having made amends on the batting front, Chennai also impressed with their bowling efforts as Mohit Sharma (4 for 41), Ashish Nehra (2 for 42) and Dwayne Bravo (2 for 17), were among the wickets. Ravichandran Ashwin, who picked a wicket in the last match, would be keen to make a dent in the Perth batting order.

The Scorchers may not be mere pushovers for Chennai though Mitchell Marsh showed while chasing down a target of 165 set up by Dophins. Needing 12 off the last two deliveries, Marsh had dispatched seamer Robbie Frylinck over deep mid-wicket and long-on to register a strunning win for his side.

The Scorchers have a bit of experience in their line-up as seasoned chinaman bowler Brad Hogg and Pakistan T20 freelance player Yasir Arafat in their ranks. Scorchers would look up to openers Simmons and Voges, who made an aggressive fifty, gave the team a perfect start after smashing 68 runs in 9 overs against Kolkata in last encounter. Some of their players Sam Whiteman, Joel Paris, Jason Behrendorff with the ball have fared well for the team in the clash with Dolphins.