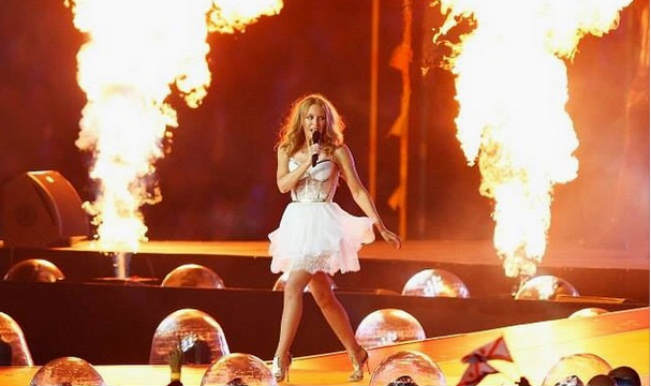 Glasgow, Aug 4: Pop star Kylie Minogue was the star performer in a glittering closing ceremony as curtains came down on the 20th Commonwealth Games where India finished a creditable fifth with 64 medals even as a couple of officials embarrassed the contingent by their antics. In presence of British Prime Minister David Cameron, Prince Edward, the Earl of Wessex and vice patron of Commonwealth Games Federation, declared the Glasgow 2014 closed as a representative of the head of the Commonwealth to mark the end of the biggest sporting extravaganza Scotland has ever hosted. Also Read - IOA Infighting Should End For The Good of Indian Sports: Rajeev Mehta

Colourful fireworks on a cloudy night skyline signalled the end of the 11-day competition among 4929 athletes from 71 countries and territories of the erstwhile British Empire. More than 2,000 volunteers sang and danced to the tunes of Scottish singers in front of a packed crowd which joined the show largely of laser light and sound at the Hampden Park National Stadium.

The athletes were ushered in at the beginning of the show and remained at the field for the entire one-and-a-half hour show, many taking part and enjoying the rock concert like atmosphere. The Indian contingent, led by flag bearer Seema Punia, who won a silver in women’s discus throw, took part in the closing ceremony, all of them wearing track suits. The contingent had been left red-faced after IOA Secretary General Rajeev Mehta and an unattached wrestling referee Virender Malik were arrested. While Mehta is accused of drunken driving, Malik faces the more serious charge of sexual assault.