India bagged its last medal in form of silver medal by Jwala Gutta and Ashwini Ponnappa on the last day of play at Glasgow 2014 Commonwealth Games. 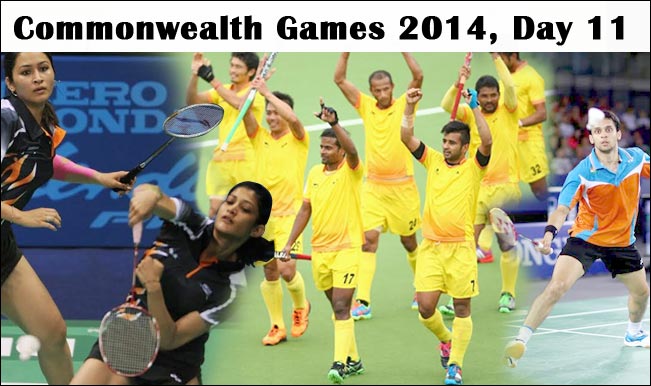 Glasgow 2014: Coming to the last day of play, India should be a happy lot with three more gold medals in sight on the finale day 11. The Indian team who are placed at the 5th position in the medal table has won a total of 61 medals including 14 gold, 28 silver and 19 bronze. India would be taking on Australia in the Men’s Hockey Final as the India shuttlers will play two gold medal matches today. Catch all the live updates Commonwealth Games here on Saturday 3 August, 2014. See the Medal Table with latest rankings. Also Read - Badminton: PV Sindhu Wins; Kidambi Srikanth, Parupalli Kashyap Knocked Out of Men's Singles in All England Open Championships 2021

India bagged its last medal in form of silver medal by Jwala Gutta and Ashwini Ponnappa on the last day of play at Glasgow 2014 Commonwealth Games. With this medal, India finished with 5th place in the medal table with their medal tally of 64 medals that included 15 gold, 30 silver and 19 bronze. India started with the Indian judokas Shushila Likmabam and Navjot Chana winning the first medals for India. It was weightlifters Sanjita Khumukchan, Sukhen Dey who brought India glory as wrestlers Sushil Kumar, Amit Kumar, Yogeshwar Dutt and Vinesh Phogat were at their best. Shooter Abhinav Bindra clinched the gold medal in his last outing at the Commonwealth Games 2014. A little mixed results from boxers and others hooters but overall it was a fine outing for the Indian contingent. Also Read - All England Open Badminton Championships 2021: PV Sindhu Leads India's Challenge in Depleted Field

Women’s Doubles Match: The Indian pair of Jwala Gutta and Ashwini Ponnappa wasted five game points in the second game to lose the women’s doubles final match to the Malaysian pair KW Woon and VKM Hoo. The India pair lost in straight sets by 21-17, 23-21 in 41 minutes to settle for silver medal.

As expected and predicted by the Hockey pundits and experts before the start of the Men’s Hockey final at Commonwealth Games 2014, the India men lost the match by 4-0 to Australia. Playing at the Glasgow Hockey Stadium, Indian men looked out of sorts right from the start of the match as the Australian hero Chris Cillireo struck a hat-trick of goals to virtually oust India much before the time was called out.

After a nerve crackling Men’s Singles Final, India’s Parupalli Kashyap wins the gold medal in the finals. He defeated Derek Wong of Singapore 21-14, 11-21 and 21-19 to take the gold medal. RV Gurusaidutt won the bronze medal in the same event. This is India’s first gold medal in badminton and 15th Overall at the Commonwealth Games 2014.

At Half Time India trails Australia 0-2 in Men’s Hockey Final with Australia’s Chris Ciriello scoring twice for the Kangaroo Nation. The first half has been completely dominated by the Australians as they had 13 shots on target compared to India’s 4. Miserable outing for the 2010 silver medallists as the match looks well in Aussies clutches.

29th Minute Goal by Australian Chris Ciriello – Another penalty corner awarded and result remains to be seen by the Australia Chris Ciriello as he scores second goal of the day. Australian are doing everything right as Indian players are just managing to hang in the match. India trails 0-2 to Australia in the Men’s Hockey Final match.

In the final of Men’s Singles match, India’s Parupalli Kashyap takes on Derek Wong of Singapore in the quest of gold medal. He takes the first game from the Singaporean player 21-14 and leads the best of three games by 1-0. Bravo!

12th Minute Goal by Australian Chris Ciriello – First Penalty corner given to the Australian side and they do not miss it. Australia’s Ciriello scores the first goal for the Kookaburas. India trails 0-1 in the gold medal match. It has been quite a spirited performance from both sides India and Australia in first ten minutes of the final match. India started off to quite a rattling start as the Australian side looked quite lively in the early stages of the match.

After rallying from two goals down in the semi-finals clash against New Zealand, India displayed stunning show of Hockey as they beat Kiwis 3-2 and set up a final against Australia. But Finals is going to be an all-together different ball-game for India against Australia who thumped their authority in their semi-finals match against England to march to their successive finals. The 2010 Winners Australia faced the same opponents in form of India as they plummeted them 8-0 to win the gold medal in Delhi. Can Sardar Singh led Indian side bring the much needed turn-around or will it be the Aussies show again? Read – Commonwealth Games 2014, Men’s Hockey final: India in quest of gold against mighty Australia

Major embarrassment for India as two of their officials – Wrestling referee Virender Malik and the Secretary Rajiv Mehta as been arrested and taken into custody by the Scotland police. The charges put on them are of different and highly shameful ones as Rajiv Mehta has been accused of driving under the influence of alcohol and without license while Virender Malik has been slapped with charges of sexual assault. If the reports are to be believed, Virender Malik made advances and spoke ill to the hotel receptionist. The two would be produced before a Glasgow magistrate on Monday.

In the meanwhile there are eleven gold medals will be up for grabs on the final day of the 20th Commonwealth Games here Sunday. India will compete in four disciplines for a shot at the top prize – in hockey, badminton and cycling events.

In the repeat of 2010 Commonwealth Games Men’s Hockey Final, we would get to see India vs Australia clash at Glasgow Hockey Stadium. The match is scheduled to start at 4.45 pm IST with India seeing it as a revenge match of the last edition’s drubbing they received at the hands of Aussies. As for the mighty Australians, they are chasing a record fifth gold medal at the Commonwealth Games.

In other of the matches featuring the Indian challenge is from the Badminton as second seed Parupalli Kashyap will play in the men’s singles gold medal match. The 2010 Commonwealth Games bronze medallist Kashyap has already bettered his record at the Commonwealth Games but would definitely like to add golden feather in his cap and make amends for the loss of top shuttlers gold medal chances for India.

In the Women’s Doubles Gold Medal match, it will see another presence of the Indian side – Jwala Gutta and Ashwini Ponnappa in the title clash. Women’s doubles defending champions Jwala and Ashwini will once again have a shot at the title they won in 2010 by defeating Malaysia’s Loo Yin Lim and Lai Pei Jing in straight games. The Indian combine had a rather easy outing by taking the match 21-7, 21-12 in 27 minutes.

If the Indian side wishes to finish among the top 5, they need to get hold of gold medals as the sixth placed New Zealand are also closely following them with 14 gold, 12 silver and 17 bronze in the medal table.

Hockey: After defeating New Zealand in the semis 3-2 Indian Men’s Hockey team will face Australia in the finals for the gold medal. The match is scheduled to start at 4:45 pm IST.

Badminton:
Men’s Singles Final: Parupalli Kashyap defeated England’s Rajiv Ouseph 18-21, 21-17 and 21-18 in the men’s singles semi-final to reach the final and now will square off against Derek Wong of Singapore for a historic gold. The match will start at 4:30 pm IST
Women’s Doubles Final: Jwala Gutta and Ashwini Ponnappa defeated L Y Lim and L Pei Jing of Malaysia 21-7, 21-12 in women’s doubles semi-final to set up the finals clash with another Malaysian pair Vivian Hoo and Woon Khe Wei. The match is scheduled start at 5:30 pm IST

These events will be followed by a Closing Ceremony at 1:00 am IST. Kylie Minogue, Lulu a Scottish Singer and Scottish band Deacon Blue will bring curtains down on the event.

Catch all the action of the Commonwealth Games 2014 here as India is ready for another brilliant outing on Day 9 of the Glasgow Games 2014.