CPL 2020 Fixtures Announced, T20 Tournament to Get Underway From August 18

As part of the strict guidelines due to the ongoing health crisis, CPL will be played entirely in Trinidad & Tobago this year with all 33 matches to be held in two stadiums.

After BBL and IPL, the organisers of the Caribbean Premier League have also confirmed the tournament will go ahead amid the coronavirus pandemic but in empty stadiums starting August 18 with the final slated for September 10. Also Read - CBSE Class 12 Board Exams 2021: Cancelled or Postponed? Education Ministry Issues Clarification. Read Here

As part of the strict guidelines due to the ongoing health crisis, CPL will be played entirely in Trinidad & Tobago this year with all 33 matches to be held in two stadiums. Also Read - Coronavirus in India May 15, 2021, LIVE Updates: Aircraft With Ventilators & Other Medical Aid Arrive From Kazakhstan

The Brian Lara Cricket Academy in Tarouba will host 23 games, including the semi-finals and final, and the Queen’s Park Oval in Port of Spain has been allotted 10 matches. Also Read - Horoscope, Today, May 15, Saturday: Relaxing Weekend For Aries, Financial Conditions to Improve For Libra

The season gets underway with 2019 runners-up Guyana Amazon Warriors taking on Trinbago Knight Riders, while the second game will be last year’s champions Barbados Tridents taking on the St Kitts & Nevis Patriots.

Fans will have to wait until game 22 for a repeat of last year’s final with the Tridents taking on the Amazon Warriors. 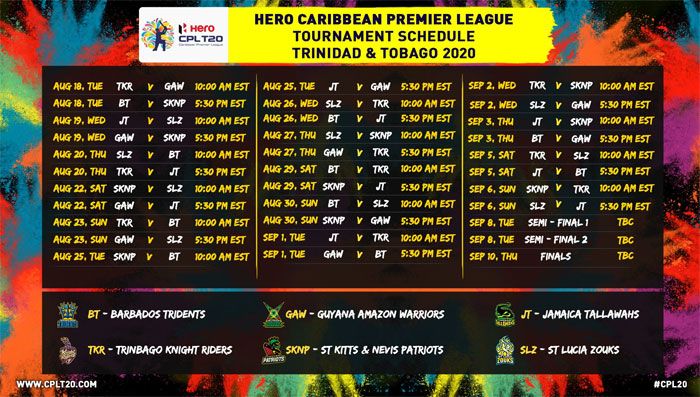 “The tournament will take place behind closed doors in a bio-secure environment with a series of stringent protocols in place to protect those involved in the tournament and the wider population from the spread the COVID-19 virus,” CPL said in a statement on Monday.

CPL’s CEO, Damien O’Donohoe is hopeful that the interest in the league will be higher than ever since it will be the first franchise-based tournament to return amid the health scare.

“We would like to express our gratitude to the government of Trinidad & Tobago for helping us to put on this tournament in such difficult circumstances. We are delighted that we are able to deliver a tournament that is ensuring the safety of the public and the players and that will be of such a high standard,” Russell said.