According to a statement from Sean Carroll, the board's integrity chief, "some of the language could be interpreted as ridiculing non-native English language speakers".

Cricket Australia (CA) are mulling to sanction a number of players from the Under-19 squad who are currently involved in the ongoing 2020 ICC U19 World Cup. The move has been initiated following a post on Instagram from batsman Jake Fraser-McGurk, who invited comments that seemingly mocked non-native English speakers. Also Read - Facebook Says It Will Pay USD 1 Billion over 3 Years To News Industry

Fraser-McGurk posted a picture of himself batting and captioned “Quarter Finals here we come” shortly after Australia’s victory over England. The post prompted a series of replies from team-mates, which have subsequently been removed and commenting has been disabled. Also Read - Australia Passes Landmark Law to Make Google, Facebook Pay For News 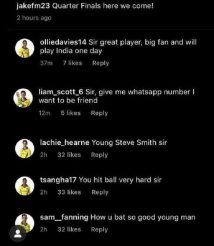 Fraser-McGurk posted a picture of himself batting and captioned “Quarter Finals here we come” shortly after Australia’s victory over England. © Screengrab

“Sir, give me WhatsApp number, I want to be friend,” commented Liam Scott.

According to a statement from Sean Carroll, the board’s integrity chief, quoted by ESPNcricinfo on Thursday, “some of the language could be interpreted as ridiculing non-native English language speakers”.

“We are extremely disappointed that some of the Australia under-19 squad members have used inappropriate language in posts on social media, which we reported to the ICC as soon as it came to our attention,” Carroll said.

“I have spoken to the players this morning and have expressed in no uncertain terms that such language has no place in society and falls well short of the standards we expect as Australian cricketers. The players have apologised for the language and taken down the posts.

“Cricket Australia will consider sanctions upon their return from South Africa, which will include but not be limited to education and cultural sensitivity training. Most of the players do not have their parents present with them in South Africa and some of them are minors. Accordingly, we believe it is appropriate to consider their sanction upon their return home.”

In fact, Fraser-McGurk, one of the players involved, has left the squad and flown home to receive treatment after he was scratched by a monkey at a nature reserve during a team outing in Kimberley.