Themain highlight of the day was also related to century man David Warner who was not only smashing the Indian bowlers apart but did some shooting from his lips. 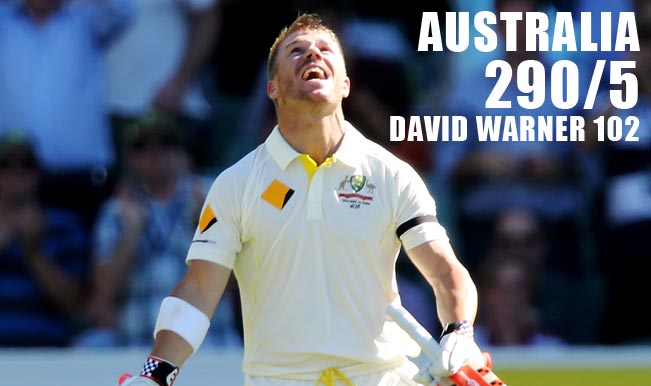 Also Read - David Warner After SRH Lose to KKR: We Failed to Execute Our Plans

Undoubtedly, pint-sized Australian opener David Warner has rose to the occasion for his side in Adelaide Oval. He followed his first inning century with another brilliant knock of 112 to help Australia consolidate their position in the first Test. Earlier, it was spinner Nathan Lyon who finished with the 5-wicket haul to restrict India to 444. One can watch the highlights of India vs Australia 1st Test Day 4, the full video highlights on the Official Star Sports Website. Also Read - SRH vs KKR Dream11 Team Prediction VIVO IPL 2021: Captain, Vice-captain, Fantasy Playing Tips, Probable XIs For Today's Sunrisers Hyderabad vs Kolkata Knight Riders T20 Match 3 at MA Chidambaram Stadium, Chennai 7.30 PM IST April 11 Sunday

India resumed the batting at overnight score of 369/5 but squandered the opportunity to get upper hand over the Kangaroos with flurry of wickets falling for them. Off -spinner Nathan Lyon played the role of wrecker-in-chief for Michael Clarke as the Indian innings was wrapped up at the total of 444. Australia’s second innings started with opening batsman Chris Rogers (21) being removed cheaply by Karn Sharma. Also Read - Great to Have Bhuvneshwar Kumar Back in Team: Sunrisers Hyderabad Captain David Warner

But the main highlight of the day was also related to century man David Warner who was not only smashing the Indian bowlers apart but did some shooting from his lips. He got involved in the first incident of fight and sledging this series, when Indian pacer Varun Aaron got him bowled on a no-ball. Both the players had fancy words for each other. It involved other players from both side with Virat Kohli, Shikhar Dhawan and Shane Watson giving the other sides some piece of advice.

Overall the Day 4 ended with Australia gaining an upper hand at 290/5 with Michael Clarke and Bradd Haddin on crease.