The victory in Karachi Test meant that Pakistan swapped positions with South Africa in the ICC World Test Championship table, moving to the No.5 spot.

Pakistan produced an inspiring performance at home as they defeated South Africa by seven wickets at the National Stadium in Karachi on Friday to take a 1-0 lead in the two-match Test series. With this win, newly-appointed skipper Babar Azam has started their captaincy on a resounding note. The victory meant that Pakistan swapped positions with South Africa in the ICC World Test Championship table, moving to the No.5 position. Pakistan have 37.7% points to its name in the World Test Championship, whereas South Africa’s points percentage fell to 34.3% following their seventh loss in this competition.Also Read - Virat Kohli vs Sourav Ganguly: The Perfect Chaos For the World

Debutant Nauman Ali, Yasir Shah and veteran batsman Fawad Alam starred for Pakistan in their win in the first Test. On day four, South Africa failed to arrest their slide and managed to add only 58 runs and lost six wickets in the process. The target of 88 was never going to enough despite the Proteas paceman Anrich Nortje dismissed both the openers – Imran Butt and Abid Ali – cheaply. However, Azhar Ali and captain Babar Azam knitted a crucial 63-run stand for the third wicket to seal the match in the hosts’ favour. Alam scored the winning runs for Pakistan. Also Read - Recent Happenings Won't Affect Brand Of Indian Cricket: Rashid Latif

Meanwhile, Virat Kohli’s Team India continues to lead the charts in the ICC World Test Championship with 430 points under their belt. India’s PCT of 71.7 percent is also above New Zealand and Australia who occupy the second and third spot respectively. Under the leadership of Ajinkya Rahane, India annihilated Australia in their own den in the recently-concluded Border-Gavaskar Trophy. Also Read - Rohit Sharma Fit to Lead India vs Windies; Bhuvneshwar Kumar, R. Ashwin Under Scanner As Hardik Pandya Back In Radar

India’s next assignment in World Test Championship will begin with a four-match Test series against England. The first Test will be played at the MA Chidambaram Stadium, Chennai from February 5-9. Joe Root-led England are coming into this series after registering a morale-boosting 2-0 series win over Sri Lanka. 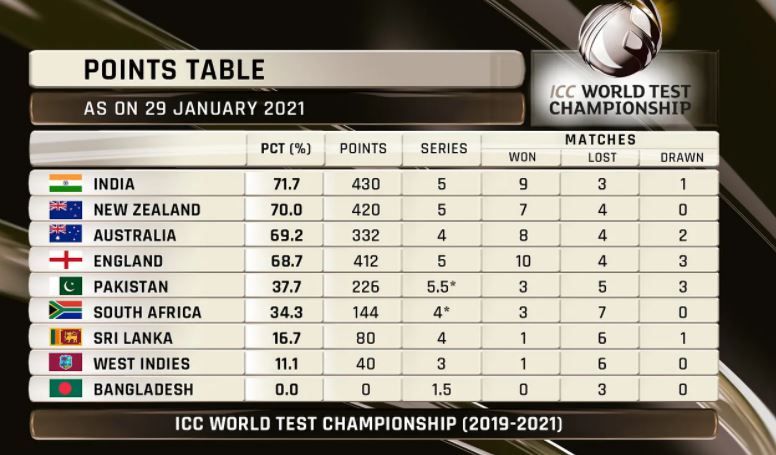 England are at the fourth position in the ICC WTC points table with 412 points at 68.7 percent. They have played 17 matches – out of which they won 10 games, lost four and played draw in three.