After watching a toddler showcasing some incredible strokes on social media, Pietersen urged skipper Kohli to pick the little kid in the Team India squad.

Gearing up for the upcoming ODI assignment against West Indies, India skipper Virat Kohli is in an upbeat mood these days after registering a comprehensive win in the T20I series. Ahead of the next big challenge, Kohli received a strange request from good friend and former Royal Challengers Bangalore teammate – Kevin Pietersen, who asked the India captain to include a particular player in the national squad.Also Read - 'Virat Kohli is a Benchmark': West Indies Assistant Coach Roddy Estwick Gives Golden Advice to Young Players

On Friday, Pietersen shared a video of a toddler which has been viral on the internet from quite some time. In the short clip, the toddler can be seen showcasing his wide variety of strokes and jaw-dropping drives which not only impressed the former England skipper but also his millions of followers. Also Read - ICC T20I Rankings: KL Rahul, Virat Kohli Move up After Impressive Show Versus West Indies; Rohit Sharma Slips Down

Amazed with the skills of the young kid, Pietersen dropped a suggestion for Kohli and Co. to include him in their squad for the upcoming series. He shared the video on his official Instagram handle with the caption, “WHAT?!?!?!?!?! Get him in your squad, @virat.kohli! Can you pick him?!?!” 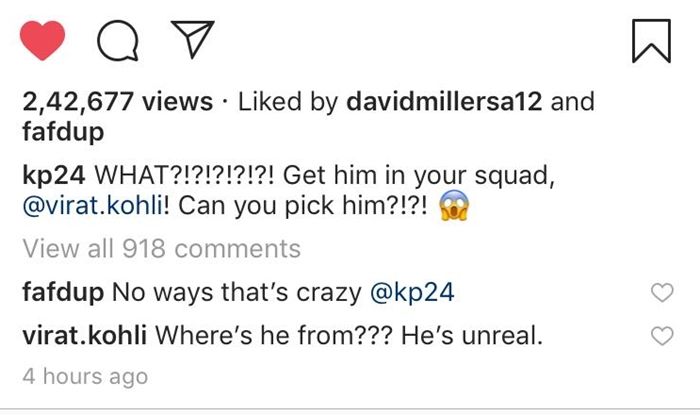 Pietersen suggests Kohli to include talented toddler in India squad©Instagram

Recently, Kohli bagged the ‘Player of the Series’ award for his sensational batting performance in the three-match T20I series against West Indies. He smashed 183 runs in three innings which included match-winning knocks of 94* and 70* in Hyderabad and Mumbai respectively.

Earlier, the 39-year-old Pietersen has also lauded India captain for his sensational strokeplay during the first T20I against West Indies. Kohli’s unbeaten 94 guided India to a thrilling victory versus Windies. Pietersen commented on Kohli’s post, “Your flick this evening was quite something, bro! Holy smokes!”.