Williamson on Friday posted a slow-motion video of him laying the ball off for his labrador who makes no mistake in catching it.

Rated as one of the finest batsman of the modern era, New Zealand captain Kane Williason is making the most of his self-isolation period as enjoys the rare break from the gruelling international routine. There is hardly a question over Williamson’s skill on the field but it seems like his dog is also more than a decent cricketer. The proof of this was on display on Friday when Black Caps skipper shared share a clip of him and his pet dog ‘Sandy’ doing some slip catching in their backyard. Also Read - IPL 2021 Points Table Latest Update After DC vs PBKS, Match 11: Royal Challengers Bangalore Reclaim Top Spot After Beating KKR, Shikhar Dhawan Pips Glenn Maxwell in IPL Orange Cap List, Harshal Patel Bags Purple Cap

The 29-year-old Williamson is counted among one of the best fielders in the world, particularly, in the slip cordon. His reflexes and sharp catching skills are a sight for any cricket lover. Shot in slow-motion mode, Williamson shared the video with the caption: “Sandy in the slips! Any other dogs out there joining Sandy? #caninecordon #daytwoisolation.” Also Read - Delhi Lockdown News: Chandni Chowk, Other Markets Under Self-imposed Lockdown From Today Due to Corona Surge

“Lockdown yoga session with Sandy ?? It’s a challenging time, but it’s important we take care of each other by listening to the experts! Stay positive, stay at home and we will get through this,” Williamson wrote.

Sandy in the slips! 😀 Any other dogs out there joining Sandy? #caninecordon #daytwoisolation

Williamson had also written an open letter to the doctors and health care professionals of his country, praising them for ‘putting their own safety on the lines’ during the time of the Covid-19 crisis.

Writing in the New Zealand Herald’, Williamson addressed the doctors, nurses and caregivers as the deadly virus continued to rear its ugly head, claiming more than 21,000 lives globally.

“Events of the past few days have made it clear we’re living through a health crisis the likes of which we’ve never seen. There will no doubt be times in the coming days when the scale of what we’re facing will seem overwhelming,” he wrote.

“We’re so grateful you have our backs. People talk about the pressure sportsmen and women are under to perform, but the truth is we get to do something we love every day for a living. We play games,” he noted. 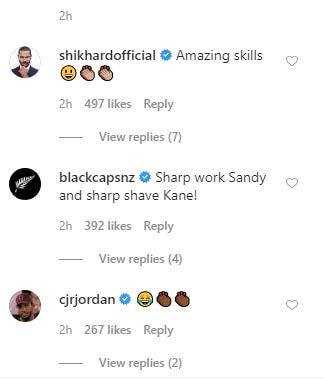 The coronavirus pandemic has claimed over 20,000 lives thus far and over 4 lakh cases have been reported around the world.

Williamson and Co. had played Australia at the Sydney Cricket Ground in front of empty stands on March 13 post which the rest of the series was called off. Later, New Zealand started imposing travel restrictions to fight the pandemic.