Phil Hughes underwent surgery and is in a critical condition after Sean Abbott's bouncer hit him on the head. 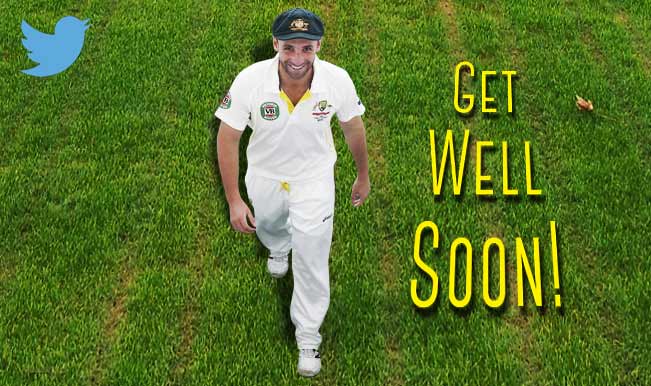 Phillip ‘Phil’ Hughes became the unfortunate talking point on Twitter after the Australian batsman was struck in the head by a bouncer while playing for South Australia in the Sheffield Shield match against New South Wales. The left-handed opener, who is due to turn 26 on November 30, immediately hit the deck after Sean Abbott’s delivery struck him on his head; despite wearing a protective helmet. Also Read - COVID-19 Aftermath: Australia Faces Recession For First Time in 30 Years

The gravity of the situation is that Hughes had to be rushed to the hospital and had to undergo a surgery immediately. Cricketers past and present across the globe expressed grief and offered their prayers in hope to see Hughes make a speedy recovery from this life-threatening injury. Hughes, who has played 26 Test matches for Australia, made the headlines on world Cricket by becoming the youngest player to score back-to-back centuries in a Test match. He did so at the age of 20 years when he scored 115 in the first innings and 160 in the subsequent innings against South Africa, helping the side led by Ricky Ponting win the match by 175 runs in March 2009. Also Read - Covidiot! Australian Woman Smashes Police Officer's Head Into Concrete When Told to Wear a Mask

In a match between England and India played in August, Varun Aaron’s bouncer had found the gap between the helmet, leaving Stuart Broad with a massive scar at the bridge of his nose. These incidents plead to ask the question whether bouncers should be banned or if the helmet’s quality requires overhaul! Here are some of the Tweets by the likes of Shane Warne, VVS Laxman, Jimmy Anderson, etc. India are due to play Australia in a four-match Test series scheduled to commence from December 4. Indian skipper Virat Kohli and allrounder Ravichandran too took to Social Media to express their feelings about Hughes shocking injury.

Just heard the news about Phil Hughes, thoughts & prayers are with you & your family. Hang in there buddy, we are all fighting with u !!!

Awful news about Phil Hughes. Fight hard, everyone’s thoughts are with you and your family. — Stuart Broad (@StuartBroad8) November 25, 2014

Just got to know abt the injury to phil Hughes. Wishing him speedy recovery. Our thoughts and prayers are with him and his family #faith — VVS Laxman (@VVSLaxman281) November 25, 2014

Awful news about Phil Hughes. Sickening to hear. Praying for him and his family.

Thoughts and prayers with Phil Hughes all the way. Fight it out mate. You are a top man. All the strength goes out to you and your family. — Virat Kohli (@imVkohli) November 25, 2014

Pretty sick morning all around. Hopefully the surgery goes well for Phil Hughes. If good wishes counted, he would emerge fine.

Prayers are with Phil Hughes and his family , wishing him all the best cracking lad !