He obliged and answered the fan. Bhuvi picked Lionel Messi over Cristiano Ronaldo during the Live session.

From catching up with fans to chatting with fellow cricketers on social media platforms, cricketers are making the most of their time staying indoors during the Coronavirus. Indian pacer Bhuvneshwar Kumar recently conducted an Instagram Live session where he answered several questions posed by his fans.Also Read - IND U-19 vs IRE U-19 Dream11 Team Prediction ICC U-19 World Cup, Group B: Captain, Vice-captain, Fantasy Tips, Probable XIs For Today's India vs Ireland at Trinidad at 6:30 PM IST January 19 Wed

A certain fan asked him to pick his favourite footballer between Lionel Messi and Cristiano Ronaldo. He obliged and answered the fan. Bhuvi picked Lionel Messi over Cristiano Ronaldo during the Live session. Also Read - Ind vs SA 1st ODI: Virat Kohli Still an Integral Part of The Side - Captain KL Rahul at Toss 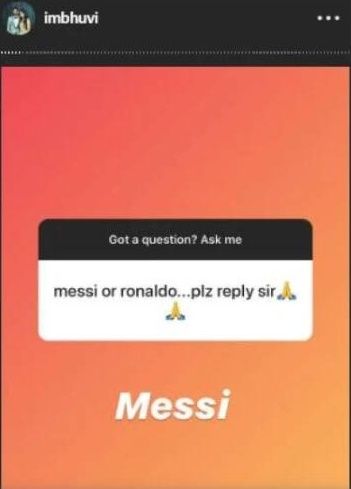 Bhuvi – who has said that the cash-rich Indian Premier League must happen – will have to wait as the T20 tournament got postponed indefinitely due to the pandemic and there is no certainty when will it be rescheduled. Considering the rampant rise in COVID-19 cases in the country, it is highly unlikely that the tournament will take place this year. Also Read - FIG vs CHA Dream11 Team Prediction Baroda T20 Challenge Match 28: Captain, Vice-captain, Fantasy Tips, Probable XIs For Today's Fighter vs Challenger at Vadodara at 1 PM IST January 19 Wed

Kumar recently revealed why the Indian pacers have been successful of late.

“It doesn’t matter who is bowling from the other end. Because I have to do what I have to do. But since both Mohammad Shami and Jasprit Bumrah are senior players, in a few words we are able to communicate with each other what the batsman is trying to do. It is like our bowling partnership. We don’t have to tell each other much. We make a conscious effort to bowl well and maintain the pressure from both ends,” he said in the second episode of ESPNcricinfo Cricketbaazi.

The Board of Control of Cricket in India (BCCI) president Sourav Ganguly has confirmed that no cricket will take place at least till August.