Fleming referred to the opening stand of 90 by MI's Lendl Simmons (65) and Parthiv Patel (35) as one of the reasons for his team's defeat. 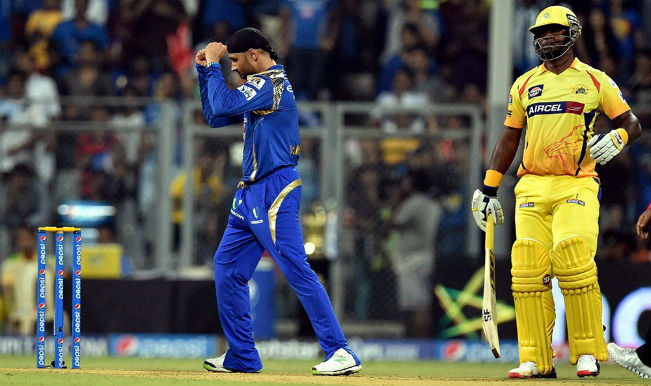 Mumbai, May 20 Chennai Super Kings’ head coach Stephen Fleming says Harbhajan Singh’s two wickets off successive balls tilted the scales in favour of Mumbai Indians, who won by 25 runs in the first qualifier, to enter the final of IPL 8. Fleming said the target of 188 looked achievable till Harbhajan got the two big wickets of Suresh Raina and skipper Mahendra Singh Dhoni. Also Read - IPL 2021: Full List of Players Released by Each Franchise on Deadline Day

“We were going okay (during the run-chase), but the game changed with those two balls from Harbhajan. Things become difficult if you lose wickets in clumps during a big run chase. We did that today ? losing two big players, key players – Raina and Dhoni. So that was the turning point and yes, 20 (odd) runs was the right differential between the teams today,” Fleming said at the Wankhede Stadium. You can watch full video highlights of CSK vs Qualifier 1 here. Also Read - IPL 2021 Retention Highlights | Complete List of Released, Retained Players by Franchises Ahead of IPL 14 Auction: Malinga Retires, Maxwell Released; Samson to Lead Royals

Harbhajan first sent back the well-set Raina for 25 by deceiving the left-hander and accepting an easy return catch and then brought the capacity crowd on its feet by trapping Dhoni leg before off the next ball to finish with superb figures of 2 for 26. The victory also piloted MI into the May 24 final and left Super Kings with the more difficult task of winning an additional game, Qualifier 2, at Ranchi on May 22, to get another shot at their rivals in the title-clash in Kolkata.

Fleming referred to the opening stand of 90 by MI’s Lendl Simmons (65) and Parthiv Patel (35) as one of the reasons for his team’s defeat. “It was a tough loss, tough game. Mumbai are a difficult team to play at home. We identified that. They played very well. I thought we created some opportunities that did not go our way. The first six overs were pretty close. We needed to get a couple of early wickets. But they got away with that opening partnership. I think we did pretty well to restrict them to 187 which was a par score.”

The former New Zealand captain also mentioned Kieron Pollard’s five towering sixes during his 17-ball 41 as another key factor. “180-plus was okay. At one stage they looked like getting into the 200s. I think we did very well. With some ounce of luck we could have got a couple of wickets in the first six. That would have changed the complexion of the game. I think the guys did well to hang in there. “They have got some big hitters, Pollard, obviously, can clear the boundary with ease. It was those sixes which kept them going in between. I thought the bowling was pretty good.”