David John Explains Everything Indian Hockey is Going Through

David, the High Performance Director of Hockey India, speaks on a difficult and controversial 2017 for the sport so far - both on and off the field.

New Delhi: 2017 hasn’t so far been a year that Indian hockey hoped for. After the high of Champions Trophy silver, an improved Olympic show, Junior World Cup triumph and Narinder Batra becoming the International Hockey Federation (FIH) president – all in 2016, the turn of events on and off the field left the last eight months full of ups and downs. And heading into the crucial year-ending tournaments – the Asia Cup in Dhaka and the Hockey World League (HWL) Finals in Bhubaneswar, it needed someone from Hockey India to step up, not just to ease the nerves of a gobsmacked Indian fan but also reassure about the health of Indian Hockey.Also Read - India vs Nepal Live Streaming SAFF Championship Final 2021 in India: When And Where to Watch IND vs NEP Live Stream Football Match Online on Discovery+, JIOTV; TV Telecast on Eurosport

And it couldn’t have been anyone better than Hockey India’s (HI) High Performance Director, David John, to be that voice in a welcoming chat with Zee Media. Also Read - Indian Hockey Team Was Hugely Motivated Before Bronze-Medal Match: Simranjeet Singh

Twin defeats to Malaysia – at Sultan Azlan Shah Cup and HWL Semis in London – came in make-or-break games and losing to Canada in London led to widespread criticism. To the surprise of world hockey, HI’s relations with FIH, despite Batra at the helm, turned sour, allegedly due to FIH president’s outburst against Pakistan on social media and the resultant apology he was asked to issue. India pulling out of FIH’s Hockey Pro League is also considered an aftermath of that, though voices emanating out of HI corridors have denied it. Also Read - India Slips to 101st Rank in Global Hunger Index 2021; Behind Pak, Bangladesh and Nepal

De-rostering Hockey India League from the 2018 calendar came as nothing less than a setback for players, leaving a question mark over the game’s future with corporates (franchise owners) mulling pullout.

String up all of the above, and there seems a lot that’s wrong at the moment. But two encouraging back-to-back wins over Netherlands in international friendlies on the Europe tour, especially the transition of juniors to senior team, ensured things aren’t as bad on the pitch as they appear.

The insightful and upfront David John addressed all that.

Summing up India this year…

David: The word is inconsistent. We tend to have some good performances, like against Pakistan (beating them twice at HWL Semis), and can be disappointing like against Malaysia and Canada. We have to be consistent to win tournaments, can’t have ups and down.

On reviewing the flop show at HWL Semis in London…

David: I didn’t have a discussion with coach Roelant (Oltmans). I myself have reviewed the matches. When we are going to meet the teams (we lost to) in future, we will be much more consistent.

David: Like coaches do, he has evolved. I think by introducing junior boys in the squad, it has given Roelant new energy, working with young enthusiastic players. He worked with them at the (2016) Junior World Cup. These young boys are keen to learn; and for a coach, I think that’s what you want from your squad. Roelant has a lot of knowledge to give in that area. 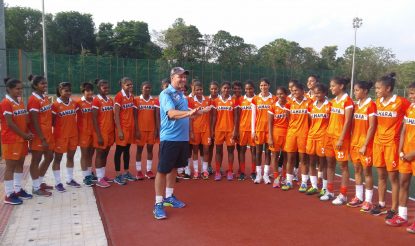 David: I think it will have a positive effect. The last 2-3 years our seniors have played a lot of hockey, minutes in matches. They come out mentally tired. Next year, we need to make sure they are fresh. We are going to play the Commonwealth Games, Asian Games and the World Cup. It’s (no HIL in 2018) actually a positive for senior players.

David: I don’t think it is a setback. It is likely they (European teams) will come here and play practice games for their matches in Australia. I can see Belgium and Holland coming to play in India on the way to Australia and New Zealand.

On the injuries to PR Sreejesh and Rupinder Pal Singh…

David: Sreejesh has advanced in his recovery (from knee injury he suffered during Sultan Azlan Shah Cup), but he won’t be ready for the Hockey World League Finals (in December). I trained with him a couple of times, and he is in really good spirits. Rupinder Pal has also put in a lot of hard work (to recover from a ruptured hamstring) and is ready to re-join the camp later this month.

Sreejesh being away from the squad is good thing in a way that it is keeping him fresh and we need back-up goalkeepers. So they are getting good exposure. Indian hockey will benefit from that in the long run. While Sreejesh not returning this year might be a bad news for the fans, we want him fit for a very difficult 2018.

The transition of juniors

David: We did very well with a young team (on recent Europe tour) and gave them exposure against two best teams (Belgium and Netherlands) in the world. These young players certainly have talent and capability, got exposure against quality opposition. Six of those I saw in Europe did a really good job. They weren’t nervous and showed poise. Dipsan (Tirkey) and Varun (Kumar) very good.

Do we know our best 18 for the Asia Cup and HWL Finals out of the core group of 33?

David: We have about 25 on our mind after this last tour (of Europe), which is a very healthy position. There will be a lot of competition for places. Young players have showed capability to play at a higher level, which will put a lot of pressure on veterans.

David: I hope Germany will come before HWL Finals. They will play matches in Bhubaneswar before the tournament. They are amenable to the idea, we need to finalise the dates.